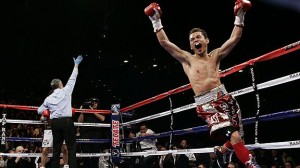 Las Vegas, Nevada– It didn’t take long for Nonito Donaire (26-1, 18 KOs) to establish his place at the top of the stacked bantamweight division.

It took one feeling-out round and about two minutes of the second before “The Filipino Flash” countered a Fernando Montiel (44-3-2, 34 KOs) hook with a left of his own that nearly decapitated the defending WBO/WBC champ from Los Mochis, Sinaloa, Mexico.

Montiel struggled mightily to get up from the hard knock down and, for some reason, the referee allowed him to go on. It took about two seconds after the action resumed before the ref has to step back in and call an end to the contest.

The Boxing Tribune Story Behind the Story: This total destruction of the consensus top fighter at 118 renders the Showtime bantamweight tournament almost completely pointless. Donaire is clearly the best fighter in the division and won’t likely find stiff competition until he ventures up in weight. A Donaire-Juanma Lopez match at 126 would be a dream.

On the televised undercard, Mike Jones (24-0, 18 KOs) put on a mature, disciplined performance against an aggressive and tough-as-nails Jesus Soto Karass (24-6-3, 16 KOs).

Unlike their first bout where Jones came gunning for Karass and would eventually punch himself out, the Philadelphia native moved and boxed and picked his shots with precision, rarely deviating from the strategy, even as Karass continued to barrel forward.

Accidental head butts opened cuts over Karass’ eyes in the first half of the 12-rounder, encouraging the Mexican to try to press the issue, but Jones held his composure and stayed on-course.

The Boxing Tribune Story Behind the Story: Jones may have been able to press for the stoppage late in the contest, but, overall, Jones showed a maturity and professionalism that he had yet to display in his career. Against Karass in this rematch, Jones proved himself to be a real welterweight contender, firmly at the top of the second tier of 147-pounders.

Stuttgart, Baden-Württemberg, Germany– Felix Sturm made the ninth defense of the WBA middleweight belt he won back from Javier Castillejo in 2007 against a hapless and unworthy Ronald Hearns (26-2, 20 KOs), stopping the son of legendary Tommy Hearns in seven uneventful rounds.

Hearns made it a point to be active, flicking out a constant, but worthless jab that rarely, if ever, made contact with anything other than Sturm’s gloves.

Sturm stalked, waited, and eventually stopped his opponent with the first real, significant punches landed in the seventh.

The Boxing Tribune Story Behind the Story: Hearns’ nickname of “The Chosen One” couldn’t have been more accurate as he was chosen from a list of patsies for a cake defense for Sturm, who, believe it or not, has still faced a higher level of opposition than Arthur Abraham in his reign at 160.