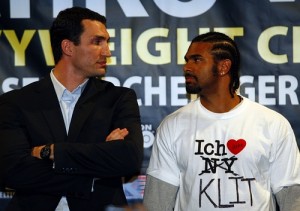 “We are back on and it’s all the same to me where it takes place.” Haye told the The Sun newspaper in the UK. “It does not bother me, Munich, Berlin, Gelsenkirchen, his backyard. I simply don’t care, it’s all the same to me. I’m prepared to go into his territory to get what he has been hanging on to for far too long.”

Klitschko-Haye has been nearly signed twice since former cruiserweight champ, Haye, moved up to challenge the sport’s undisputed #1 big man. Both times, however, the bout fell apart over financial issues. In their most recent negotiations, talks ended in a dispute over UK TV money, and both sides went their separate ways with Klitschko signing to fight Brit, Dereck Chisora on April 30th and Haye exploring possible bouts against Alexander Povetkin and WBA #1 contender, Ruslan Chagaev.

Despite the positive tone and various rumors circulating from both camps, Haye’s manager Adam Booth has remained optimistic, but non-committal in his public comments. On the other hand, Klitschko’s manager, Bernd Boente, has told several sources that he is “very positive” the fight gets made this time, but has hinted that Wladimir’s brother and WBC heavyweight champ, Vitali, could also be somehow in the mix.