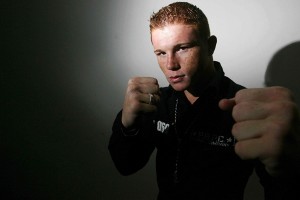 The usually affable 20-year old, nicknamed “El Canelo” was quietly seething and visibly uncomfortable with the televised mock trial to discuss whether Sulaiman was guilty of wrongdoing in the sanctioning of a world title bout between Alvarez and Hatton.

“I don’t belittle Alvarez’s talents,” Marquez offered, “but which ranked fighters has he fought to earn his #1 ranking?”

Sulaiman fired back. “The WBC decided that Alvarez is #1 in the world and whoever doesn’t believe it, settle it with him…It’s the fans who support Alvarez. The public is with Alvarez and we have to be with Alvarez. We don’t commit injustices.”

The back and forth among the debating parties was good-natured, but strong-worded– The kind of “friendly debate” between rivals that means a lot more than any of the parties are willing to let on.

Beristain would jump into the fray, “I’m not downgrading Alvarez, I’m talking about the inferior level of his opposition. If you had put him in with (Alfredo) Angulo, it would’ve been a great war and Alvarez could prove himself and nobody could doubt his ability.”

The debate would then shift to Matthew Hatton and the absurdity of sanctioning a title bout for an unranked fighter who has never even competed in the weight class.

“The WBC knows what its doing,” chimed in Golden Boy figurehead, Oscar De la Hoya via satellite. “They’ve done it for years and have done it for Chavez, Marquez, me…This is Hatton’s and Canelo’s great opportunity, like when I first fought for a world title or when Juan Manuel Marquez did. You need to respect that and respect that the WBC has done great things and they know what they’re doing. Matthew Hatton is a dangerous fighter. We’re going to see a tough, close fight.”

Meanwhile, the subject of the debate was still sitting quietly via satellite, looking the part of a wounded little kid watching his divorced parents argue over custody.

At one point, the host of the show turned to Alvarez and asked him if he, and his record, were over-hyped.

“I’m not saying that I’m the best in the world yet,” Alvarez responded, his usual smile replaced by a serious, blank expression. “I’m conscious of what I’m doing. I’m preparing myself for that and these are the first steps.”

They say that any publicity is good publicity, but anyway you cut it, this was hardly the confidence boost a young fighter needs going into the biggest fight of his career. And the saddest part of this whole situation is that it didn’t have to turn out like this. The young, developing superstar didn’t have to be put into such a “no win” situation.

Alvarez-Hatton is a pretty good fight on its own and it represents a nice step up in competition for “Canelo.” Hatton is no patsy and, while he’s not likely to win, he’s no shrinking violet in the ring, either. Alvarez will push and Hatton will push back for as long as he’s upright.

As Sulaiman pointed out in the mock TV trial, it was Golden Boy who came to the WBC looking for a “world” title designation for this contest and, obviously, with a nice, hefty sanctioning fee on the table, the WBC found a way to make it happen.

Now, even if Alvarez wins in spectacular fashion, he will be burdened with the stigma of having a hand-picked victory and a “bought” title. He’ll also be forced into a situation as WBC champ where his handlers will have to actively play politics to keep their young fighter away from ranked challengers deemed too tough for the 20-year old at this stage of his development.

By making the cynical, pointless move to force a round peg into a square hole by pursuing a worthless world title belt, Golden Boy has turned a young fighter with nothing but positive karma into one who is taking a bloated ranking into a manufactured title bout against an unworthy opponent. And even should he win, the title reign will be dubious, at best, since even Alvarez, himself, acknowledges the fact that he’s simply not ready for the top fighters in his division yet.

With a curious boxing public watching and more than 200 million Mexicans and Mexican Americans eagerly awaiting “the next big thing” in Mexican boxing ,Golden Boy has done what they do best when it comes to young, developing fighters– they’ve screwed up.

The popular “Canelo” Alvarez should be preparing himself for a career-defining step up this Saturday. Instead, he finds himself walking into a no-win situation.