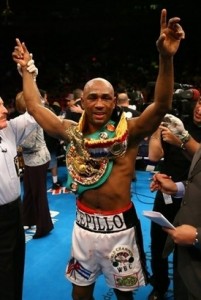 Planet Hollywood Resort and Casino, Las Vegas, Nevada– After two close rounds, former world heavyweight title challenger, Michael Grant (47-4, 35 KOs) knocked out veteran Tye Fields (45-3, 41 KOs) in the third with a big, straight right hand that sent Fields to the canvas hard. Fields struggled to get up, but was obviously unable to go on, causing referee Joe Cortez to wave off the fight.