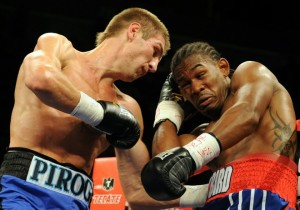 As promised following his brutal fifth round title-winning KO of Daniel Jacobs last year, WBO middleweight champ, Dmitry Pirog (17-0, 14 KOs) is taking the belt back home to Russia for his first defense. Pirog will be facing Argentina’s Javier Francisco Maciel (18-1, 12 KOs) this coming Saturday. Maciel has never fought outside of Argentina and has faced only regional/national level opposition. After that, the belt may still remain in Russia since Pirog’s number one contender is Armenia-born Russian, Gennady Marirosyan (21-2, 10 KOs).

IBF middleweight champ, Germany’s Sebastian Sylvester (34-3-1, 16 KOs) is slated to make the fourth defense of his title against Australia’s Daniel Geale (24-1, 15 KOs) on May 7th in Neubrandenburg, Germany. Geale beat Roman Karmazin via TKO 12 in October of last year in an official IBF title eliminator.

As reported here previously, Matthew Macklin (28-2, 19 KOs), following the cancellation of his bout with Winky Wright, will be back in action on the Amir Khan-Paul McCloskey undercard against Khoren Gevor (31-5, 16 KOs).

Frenchman, by way of Cameroon, Hassan N’Dam N’Jikam (25-0, 17 KOs) will be taking on the Dominican Republic’s Giovanni Lorenzo (29-3, 21 KOs) April 2nd in what is being billed as a defense of the WBA interim middleweight title for N’Jikam.