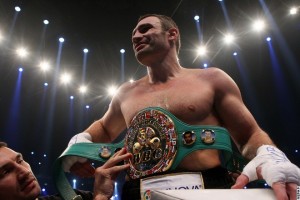 FIGHTER OF THE WEEK: GUILLERMO RIGONDEAUX

Rigondeaux (8-0-0, 6 KOs) received some criticism for the lackluster manner in which he won his 122 pound belt last November. His first defense however, was a different story. The former two-time Olympic champion went to Dublin to fight Irishman Willie Casey in his own back yard, and completely blew him out in less than a round. Casey (11-1-0, 7 KOs) was previously undefeated and a European champion, but not even in the same ballpark as Rigondeaux in terms of talent.

After showing a very complete offensive repertoire in his quick victory, Rigondeaux looks like the real deal at 122 pounds. If not for boxing’s Top Rank/Golden Boy cold war, a showdown with bantamweight monster Nonito Donaire (26-1-0, 18 KOs) would be a huge potential match up. Bob Arum has plenty of talent left in the 122-126 range though, and Rigondeaux should be in a big fight very soon.

An ultra-talented champion facing a determined but limited challenger generally is a good recipe for an entertaining, if not competitive, fight. This match up followed that formula to the letter. Other than a few nice moments, Magee (34-4-1, 24 KOs) wasn’t particularly effective, but he showed considerable heart to continue on through a brutal body assault from Bute. After the punishing body shots had taken their toll, Bute (28-0-0, 23 KOs) stopped Magee with picture perfect uppercut to the chin in the 10th round.

While it has been fun watching Bute’s dominant title reign, it’s time for him to step up the level of competition. A showdown with former 168 pound king Mikkel Kessler (43-2-0, 32 KOs) appears to be in the works, and that would be a move in the right direction. Bute’s true class may not be known for another year however, as he waits for the winner of Showtime’s super six tournament.

STORY OF THE WEEK: HEAVYWEIGHT DISAPPOINTMENT

Through no fault of his own, heavyweight titlist Vitali Klitschko (42-2-0, 39 KOs) was once again in a bad fight Saturday. This time the blame is to be placed on the knee of his opponent Odlanier Solis (17-1-0, 12 KOs), which gave out in the first round after Klitschko seemed to catch him with a quick shot to the temple.

Whether it was the knee injury (as Solis claimed) or the punch (as Klitschko claimed) that really ended the fight, there is no debate that the result left a bad taste in the mouths of boxing fans. Hopefully this fight, the first shown on new premium network Epix, won’t sour the attitude of too many regarding the heavyweight division, as there do appear to be some entertaining developments (finally) on the horizon.

Sean Morehouse can be reached by email at morehouse1734@yahoo.com or followed on Twitter @morehouse17