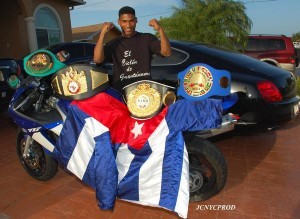 If you’re a pessimist by nature, Cuba’s heavyweight Olympic Gold Medalist, Odlanier Solis may have put a stop to the perceived momentum generated by boxing’s best crop of Cuban fighters since Fidel seized control of the island nation more than five decades ago.

But, really, as bad as La Sombra’s one-round exit against Vitali Klitschko was, there’s a lot more positive than negative in the world of Cuban prize fighters.

On the same day of the Solis debacle, Guillermo Rigondeaux made a case for himself to be included among the best jr. featherweights in the world by slaughtering Ireland’s Willie Casey in one round.

Now, one week later, we get another surge of Cuban talents looking to impress and push forward to bigger and better things.

Opponent, Molina, is no push-over and has come up the hard way. Despite a nearly two-year layoff, Molina is coming off two big wins against Danny Perez and Ed Paredes. He’s also come up against Julio Cesar Chavez twice, Mike Alvarado, and a host of high-end club-level fighters. Three of Molina’s four losses are of the controversial variety and nobody has yet been able to dominate the native of Patzcuaro, Michoacan, Mexico.

Expect competitive bouts where the winners will have truly earned their victory.

Gamboa, for his part, is one of the sport’s best talents and seems to be just a fight or two away from pound for pound recognition. A win over Solis will lead to a title defense against the winner of the Mikey Garcia-Matt Remillard bout on the undercard. Then, all rounds lead to unification with Puerto Rico’s Juan Manuel Lopez and/or Indonesia’s long-reigning WBA featherweight champ, Chris John.

The 29-year old Gamboa’s future seems bright and only limited by his own occasional lapses in concentration and defense.

This weekend we’ll see whether the three Cuban talents, Gamboa, Lara, and Jhonson, continue to move forward or if, like Solis the week prior, will be stopped dead in their tracks.