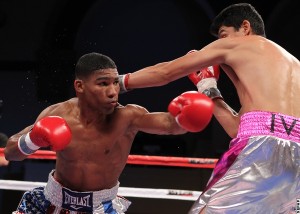 FIGHTER OF THE WEEK: YURIORKIS GAMBOA

It sure makes picking this category easy when the biggest name in action wins by dominating knockout. Jorge Solis (40-3-2, 29 KOs) came in to action on Saturday having only been stopped once in 44 career fights. You may have heard of the last guy to finish him, the name Pacquiao ring any bells? A tough, skilled veteran who is capable defensively figured to give Gamboa (20-0-0, 17 KOs) a test. No sense of competitiveness ever really materialized, however. The cyclone from Guantanamo felt his opponent out for the first round, and then opened up in a big way. Solis was knocked down several times, including a jaw-dropping overhand right-left hook combination to punctuate the end of the third round. Solis was saved by the bell, but didn’t last much longer as Gamboa put him away with a savage flurry in the fourth. For all his flaws, when Gamboa turns on his offense he looks like a miniature Mike Tyson. He is without a doubt one of the most explosive natural athletes in the sport today.

While not entirely action packed, this fight was full of intrigue as huge favorite Lara (15-0-1, 10 KOs) lost his perfect record to a very determined opponent. Molina (17-4-2, 5 KOs) might have been shorter on skills, but he refused to be out worked, making Lara uncomfortable with pressure throughout the night. Lara, for his part, was able to sharp shoot Molina and land some effective blows, but he just didn’t get off enough to get the win.

The draw is a setback to Lara, who was talking title shots before the fight. Hopefully for the former Cuban amateur standout, this will serve as a lesson in stepping up your level of activity to deal with a tough veteran opponent.

Guess what boxing fans? Floyd Mayweather (41-0-0, 25 KOs) may or may not have asked for too much money and may or may not be looking for a fight with some random nobody instead of Pacquiao… allegedly…

In typical fashion the boxing media proves again that Floyd is like that pretty girl at school that they claim to despise, yet can’t stop talking about. While he remains silent about his boxing future, the boxing insiders continue to go on speculation and rumor about what he may do.

As much as his career has been a circus, Floyd is an all-time great, so let’s hope we see him in action in some capacity before too long. Let’s also keep hoping that we see the big one against you know who before they are both too old to slide through the ring ropes. Until we hear something from the horse’s mouth though, don’t put too much stock in rumors about “Money.”

Sean Morehouse can be reached by email at morehouse1734@yahoo.com or followed on Twitter @morehouse17