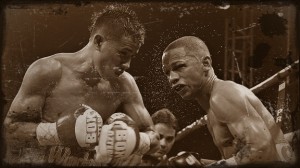 Giovani Segura is about as subtle and nuanced as a sledgehammer to the gut.

The Altamirano, Guerrero-born “Aztec Warrior” and undisputed jr. flyweight champ comes to fight, lives to battle, and only knows how to come forward.

For this Saturday’s rematch against Puerto Rican former world champ, Ivan Calderon, Segura is not likely to add any new tricks to his game or adopt any new moves. His success will depend on such unromantic concepts as his ability to still make the 108 lb. limit and whether the 36-year old Calderon can turn back the clock one last time and find his groove.

The last time out, in Puerto Rico, Segura pushed hard and hurt Calderon to the body, slowing the slick southpaw down, rendering him virtually immobile by the fourth round. The proud Puerto Rican future Hall of Famer responded like a real warrior and, with his legs taken from him, began to slug with the slugger. The back and forth action was enough to get the contest named The Boxing Tribune’s Fight of the Year for 2010. However, it would cost Calderon his WBO title as he was unable to continue after being dropped in an especially brutal eighth round.

Calderon claimed that his lack of mobility in the first bout was, in part, due to leg injuries suffered in training camp, but he also gives partial credit to Segura’s dedicated body work.

This time, Calderon will have to venture into Segura’s back yard of Mexicali, Baja California, Mexico and, for the first time in his stellar career, have to prove himself to a skeptical boxing public.

If Calderon is telling the truth about the leg injury and if Segura, as rumored, is having trouble making the 108 lb. limit, expect the former champ to take back his title.

The fans in Mexicali will be out in full force on Saturday to support their countryman. Mexicali was where Segura won his first world title and its where, years earlier, he trudged through abandoned sewage tunnels en route to a better life in the United States. One can’t help but feel that, for him, the return to Mexicali represents a return to the struggle and hunger that has defined his career thus far.

The “Aztec Warrior” will come out and push as hard as he can for as long as he can. The burden will now be on Calderon to re-claim his title and prove that he’s still the same technically brilliant fighter who had boxed his way to two dominant title reigns in two different divisions (105 lbs. and 108 lbs.) over seven outstanding years.

Boxing is the great “truth-teller” and, this Saturday from the Auditorio del Estado in Mexicali and via pay-per-view, we’ll find out the real story between two of the best jr. flyweights in recent memory.

Segura, however, is sure that, at the end of the day, it’ll be his truth that prevails.

“He learned that I wasn’t joking around with my power, ” Segura told The Boxing Tribune. “He knows it’s true.”