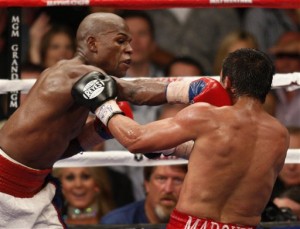 5-division champ Floyd Mayweather Jr., who has been inactive since May of last year, has once again found an opponent in the Internal Revenue Service.

According to the IRS, the boxing star owes $3.4 million in back taxes from earnings in 2009. Three years ago the fighter known as “Money” Mayweather was forced to pay $5.6 million in unpaid taxes for his earnings in 2007.

This latest tax bill comes weeks before Mayweather is due to engage in back-to-back courtroom battles.

On April 25th, Mayweather will face battery charges stemming from a November altercation with a security guard outside Mayweather’s Las Vegas home. The 34-year old fighter is accused of poking the security guard in the face over a dispute regarding cars parked outside of Mayweather’s residence.

Three days later, Mayweather faces the much more serious charges of grand larceny, coercion and robbery in a domestic violence trial where the boxer is accused of striking a former girlfriend, stealing her cell phone, and threatening two of her children. If guilty on all charges, Mayweather could face 34 years in prison.