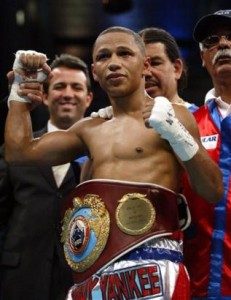 Following his third round TKO loss to Giovani Segura last Saturday, the 36-year old native of Guaynabo, Puerto Rico, Ivan Calderon, has announced his plans to keep on fighting, but to do so at a more comfortable weight.

Calderon, who made eleven successful title defenses at the 105 lb. limit from 2003 to 2007, will be returning back to the division later in the year.

Segura, who has now stopped Calderon twice, also announced his change of weight class, moving up from 108 lbs. to the 112 lb. flyweight division.