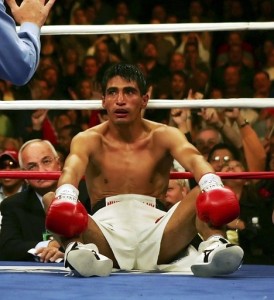 Former three-division champ and future first-ballot Hall of Famer, Erik “El Terrible” Morales, will be a supreme underdog for Saturday’s contest at the MGM Grand in Las Vegas against heavy-fisted slugger, Marcos Maidana– and rightfully so.

The last time Morales looked like the “real” Morales was back in March of 2005 when he out-boxed, out-thought, and out-worked a hard-charging Manny Pacquiao in a close, but unanimous decision.

As it turned out, it was Morales’ last stand after a blistering and bruising eight-year run which saw him in three brutal wars with Marco Antonio Barrera as well as tough contests against world class battlers such as Wayne McCullough, Kevin Kelley, Paulie Ayala, Jesus Chavez, Junior Jones, “Famoso” Hernandez, and Daniel Zaragoza. Throw in thirteen other fights in that same period of time, mostly against solid opposition, and you get the recipe of a young fighter, in his early to mid-twenties, who left everything he had in the ring.

But Morales didn’t stop after the Pacquiao win.

In his next contest, quick and agile, Zahir Raheem would beat him via upset unanimous decision. Then, in a violent, taxing rematch, Pacquiao would stop the Mexican warrior in ten brutal rounds that had more than a few experts calling for Morales to call an end to a stellar career.

But the Tijuana native fought on– getting stopped by Pacquiao once again, this time in three one-sided rounds. Surely, as Morales sat in the ring, resigned to his fate and hearing the full ten count, the end had come. With a wink and a nod to his corner as he sat on the canvas, “El Terrible” acknowledged that it was, indeed, all over.

But, still, he fought on.

Nine months after the Pacquiao TKO loss, he was back in the ring, dropping a close, but unanimous decision to David Diaz in a bid to win the WBC lightweight title.

After the bout, Morales acknowledged the loss and the fact that it was now, finally, time to call it a career. There was nothing left to prove and no point in going on at a diminished level. He managed to keep his word for all of thirty-one months.

His 2010 comeback began with a tougher-than-expected decision victory over journeyman, Jose Alfaro. Then, a stoppage in six over Willie Limond and, most recently, a tight decision win over Francisco Lorenzo– a late substitute for the much tougher Jorge Barrios.

None of his recent wins over very marginal opposition have been particularly dominant, with even his stoppage of Limond having its rough patches. During his return, it has become clearly evident that Morales, a featherweight in his prime, is also having to kick things up a notch to even make the welterweight limit anymore.

This does not bode well for a man who is about to step into the ring with a prime, bomb-throwing brawler.

The 27-year old Marcos Maidana is lacking in a lot of areas, but he is an honest-to-goodness tough guy with the arrogance of youth. Whatever he lacks in skill and technique is made up for by raw aggression and the hunger that helped him pull himself out of the slums of Buenos Aires, Argentina– the same hunger that once drove Morales to rise above his crime-infested barrio in Tijuana.

Maidana has every physical edge coming into this contest. He’s naturally bigger, stronger, quicker, younger, and has a more dependable chin. Last time out, despite dropping a decision, he nearly did away with the well-regarded UK star, Amir Khan and has already notched brutal wins over prospect Victor Ortiz and the solid Victor Cayo. Morales’ only edge is the collective experience of a seventeen-year career with about fourteen years at the elite, world class level. But will that be enough against someone with so many physical advantages? The odds makers don’t think so and have made Morales a +450 betting underdog. In agreement is the boxing community, which has expressed almost unanimous, sincere concern for the well-being of Morales.

Against original opponent, Juan Manuel Marquez, he likely would’ve been picked apart by a supremely-skilled lightweight master. Against Maidana, a natural jr. welterweight who will probably tip the scales above 150 by fight time, the general consensus is that Morales will be bludgeoned until unconscious or forced to surrender.

Sources indicate that Morales is not in dire need of a payday, so the comeback can be chalked up to the cliche of a 34-year old ex-athlete with nothing to do and a desperate hunger to re-live past glory days.

However, the Maidana-Morales bout is likely to play out like another long-time boxing cliche– The passing of the torch from old star to young lion via brutal, senseless beating.