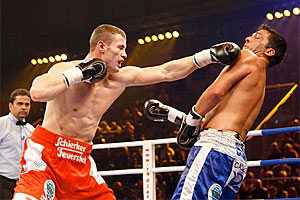 Defending WBO middleweight champ, Robert Stieglitz (39-2, 23 KOs) will be seeking to make the fourth defense of his belt against late substitute, Khoren Gevor (31-5, 16 KOs) this Saturday in his adopted home country of Germany.

Stieglitz-Gevor came together by chance, after Stieglitz’s original opponent, Dimitri Sartison, pulled out of their bout due to injury and Gevor’s opponent, Matthew Macklin also canceled his contest.