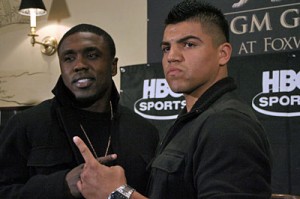 WBC welterweight champion Andre Berto (27-0, 21 KO) recently took a few minutes from his training to speak to The Boxing Tribune. As he prepares for his April 16 title defense against former jr. welterweight world title challenger Victor Ortiz (28-2-2, 22 KO), Berto knows of the importance of the challenge before him.

We spoke to the 27-year old Haitian-American regarding his inability to draw Shane Mosley, Miguel Cotto, and Manny Pacquiao into serious negotiations, the criticisms he has faced thus far in his career, his upcoming fight with Victor Ortiz, and more.

The Boxing Tribune: First of all, Andre, congratulations on your knockout victory over Freddie Hernandez. It happened so fast, I looked away for a moment, turned back and Hernandez was down. Can you recap what happened in that round for us?

Andre Berto: It was a fight that I trained really hard for and I felt like I was in incredible shape. I felt the speed and the power. I really wanted to try and test him out early to see how much he wanted to trade, and if I could counter on him. I just threw a left hook to get closer to him because he had that long range. I came over the top with the right hand and hit him right on the chin, and that was that.

BT: The last time we spoke you mentioned Shane Mosley and Miguel Cotto as the guys you wanted to fight next. Manny Pacquiao came up as well. What happened to derail negotiations with Mosley and Cotto?

AB: I’m not sure really. Of course our team reached out to them to try to make it happen, but as you know, Cotto fights under the Top Rank banner. After my fight we tried and Mosley went his way… had other plans. We just continued working on ours.

BT: You couldn’t agree to terms with Mosley, Cotto, or Pacquiao. Then Kermit Cintron had some harsh words to say about you. Was there ever a formal offer from, or to Cintron’s camp?

AB: No, it just wouldn’t make sense, you know? I mean, anybody can come out and just say what they want to say, but at the end of the day, if it doesn’t make sense nobody’s going to go for it. So it was no use looking at that.

BT: As I’m sure anyone is aware, you get a lot of criticism in the media. How do you feel about that, and do you feel it’s due in part to the media’s dislike for Al Haymon and your business relationship with him?

AB: Of course. I think the media they see the position that I’m in; I’m a young guy that gets a lot of TV time. Right now in the boxing game TV time is hard to come by. I have a tremendous team behind me. I have HBO that believes in me and I feel that the media saw that I’m getting a little bit too privileged, maybe. Then again, I’m in there putting on a show. It’s not for me to judge at all, I just need to do my job, which is to keep going in there and putting on a show. Keep fighting. I mean, when it comes to critics, that’s exactly what they are – critics. I don’t pay much attention to it.

BT: As a young guy you were given a very nice deal by HBO. If you had to do it over again, knowing you’d get this much criticism, would you sign on the dotted line?

BT: Do you feel like Bob Arum’s dislike of Haymon may have cost you an opportunity against Manny Pacquiao?

AB: Of course I think it probably had something to do with it. You know Bob Arum and Al Haymon have definitely had some disagreements in the past, and it’s unfortunate, but right now I’m focused on Victor Ortiz. We’ll just continue to move past it, and that’s the only thing I’m focused on right now.

BT: You just segued into my next question. When it was announced you’d fight Victor Ortiz next, you received a lot of criticism over your choice to fight another jr. welterweight contender. What makes Victor Ortiz stand out from the rest, and makes him a worthy opponent for Andre Berto?

AB: Man, there’s always criticism. He makes more than a good opponent. He’s a tough kid and he stepped up to the plate and accepted the fight. All these other guys that they want me to fight, and the guys they think I should fight, they don’t want to accept the fight. The Shane Mosleys, the Cottos, the Pacquiaos, they’re out there but they’re under Bob Arum’s umbrella and they don’t want to accept the fight. There’s nothing that I can do. So all the criticism, I don’t listen to, because most people don’t know what’s going on behind the scenes. We’re asking for these fights, and we’re trying to negotiate these fights, and these fights can’t happen. These other guys let their promoters take control of everything they’re doing. There’s nothing I can do about it. Victor Ortiz stepped up to the plate. He’s a tough young kid with a lot of power and speed. We’re set for a great fight.

BT: Have you studied much film on Ortiz?

AB: I’ve seen Ortiz in the past, but I don’t really watch too much tape on him. My coaches watch the tapes, but I’ve seen him enough times to see what I’m dealing with. We’re putting together a game plan to deal with what he brings.

BT: From what you’ve seen, what do you think Victor Ortiz does well in the ring?

AB: It’s like I said, I think his speed and his power. I think he’s hurt pretty much everybody he’s been in the ring with. And it should be difficult because I’m fighting a southpaw. But then again fighting a southpaw won’t make a difference on my speed and power. He does some things that I’ll have to look out for, but I’m great at adapting to people’s styles. The general public has watched me grow over the years on HBO, so I don’t think it’ll be much of a problem.

BT: What weaknesses do you see that you think you can exploit?

AB: Experience. He does have speed, but I think my speed – I’m a little bit faster than he is. I think he’s pretty basic, just straight up and down with some cracking power, but he has to be there to shoot the punches. He makes little small mistakes that I plan to expose.

BT: Closing thoughts for the fans?

AB: To all my fans that are representing Team Berto, they know it’s not just a movement, it’s a lifestyle. I continue to appreciate everybody for their massive support.