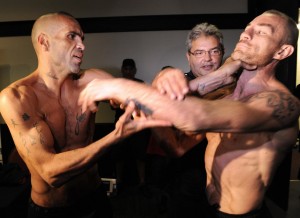 The bad blood between middleweights Anthony Mundine (40-4, 24 KOs) and Garth Wood (10-1-1, 6 KOs) boiled over at the weigh-in for their Wednesday rematch at the Brisbane Entertainment Centre in Boondall, Queensland, Australia.

At the staged stare down for reporters, Wood headbutted Mundine, causing a brief scuffle between the two that featured Mundine grabbing Wood by the neck. Staff separated the pair, while both continued to hurl insults at one another.

Mundine, who was upset via fifth round KO by the unknown, unproven Wood in December of last year, has accused his fellow Australian of being a dirty fighter and employing Muay Thai tactics in their first bout.

Ward, who got his first shot at Mundine by winning Australia’s version of The Contender, responded confidently, “I am sure Anthony will have a fight he’ll never forget. I will put him in retirement.”