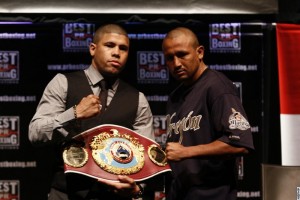 The undefeated Lopez is coming off last November’s 8-round TKO victory over long-time bantamweight and super bantamweight titlist, Rafael Marquez. After 8 rounds of back and forth action dominated mostly by Lopez, a shoulder injury forced Marquez to retire on his stool before the start of the 9th round.