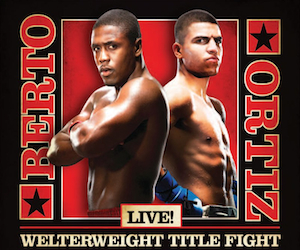 Andre Berto (27-0, 21 KO) was supposed to be a superstar at this point of his career. The 27-year old Haitian-American native of Winter Haven, Florida was on the fast track to super stardom. He was young, strong, fast, powerful, and showed flashes of brilliance as he rose up through the sticky dregs of the welterweight ranks.

Berto is still young, fast, powerful, and shows flashes of brilliance as he defends his WBC welterweight title. Boxing fans have not yet accepted him due to the fact he has not yet faced the true best competition available. Whether by fault of his own, or outside forces beyond his control, the fact remains, the biggest fights aren’t being made.

Since Berto captured the vacant WBC welterweight title in 2008, what could have been a meteoric rise to stardom has looked more like a defective bottle rocket that screams along the inches above the pavement, only to crash and pop under a neighbor’s car. After a lackluster defense against Stevie Forbes, Berto’s disputed decision victory over Luis Collazo in January of 2009 called for an immediate rematch. When that rematch never happened, fans turned their backs on the young power puncher.

Then April 10, 2010 happened, confirming the worst case scenario for all those concerned with the career of Andre Berto.

Berto was set to defend his WBC welterweight title against former WBO welterweight titlist Carlos Quintana, in Sunrise, Florida. The ticket sales of Berto’s 4th title defense were set to be donated to the Berto Dynasty Foundation, to benefit “Project Medishare” relief efforts in Haiti. In an arena that is built to seat nearly 21,000, a paltry 972 tickets were sold, thirty-something miles from where Berto was born and raised.

Andre Berto has more talent and potential than any welterweight not named Pacquiao or Mayweather, but has not yet put his brush to canvas and painted his masterpiece.

Victor Ortiz (28-2-2, 22 KO) will stand across the ring from Andre Berto on Saturday April 16. Like Berto, Ortiz has had his heart and desire called into question over the last 2 years. Once thought to be the second coming of Oscar De La Hoya, uncertainty and lack of confidence have plagued Ortiz’s career since his 6th round TKO loss to Marcos Maidana in 2009.

After the fight, in which Ortiz looked to Referee Raul Caiz Sr. and shook his head when asked if he would continue, Ortiz told HBO’s Larry Merchant, “I was hurt. I’m not gonna go out on my back, I’m not gonna lay down for nobody.” He continued to say, “I’m gonna stop while I’m ahead, that way I can speak well when I’m older. I’m young but I don’t think I deserve to be getting beat up like that.”

Ortiz slowly rebuilt his confidence over the course of 4 fights. Despite knocking out 3 of his 4 opponents, it was apparent to all observers that his killer instinct was lacking. That lacking killer instinct was never more apparent than in Ortiz’s last bout, a 10-round majority draw against Lamont Peterson in December. Despite dropping Peterson twice in the 3rd round, Ortiz never moved in for the kill, allowing Peterson to rebound and score a draw on 2 of 3 judges’ scorecards.

Ortiz, who rehydrated to 156 pounds on the day of his fight with Peterson, has now moved up to the welterweight division and has insisted that he intends on staying there. Ortiz has been given the chance to boost his career and silence some of his critics with a victory over Berto, a champion in his fighting prime that has the ability to put his opponents away with sometimes spectacular results.

While Andre Berto has never been mistaken for a blood-and-guts warrior, his close fights with Luis Collazo and Juan Urango have shown he is willing to dig deep for 12 rounds, however aesthetically unpleasing they may have been. Victor Ortiz gives Berto a chance to show he can pit his speed and power against a foe that has comparable speed and power, and can test his resolve in the ring.

Charles Bukowski once wrote, “What matters most is how well you walk through the fire.” Saddled with the intense scrutiny of critics and unsatisfied fans, Andre Berto and Victor Ortiz must both face the toughest challenges of their respective careers. With questions before them, each man must walk through the fire to present their answers to the world.