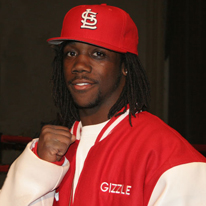 Sharpe recently resumed his career after nearly 45 months of inactivity, losing by TKO in the 4th round of his February 11 bout with Peter Quillin. Dating back to 2004, Sharpe has gone 2-6-2, losing to Giovanni Lorenzo, Pawel Wolak (TKO losses), Andy Lee, James McGirt Jr., Ronald Hearns (UD losses), and the aforementioned TKO4 loss to Quillin.