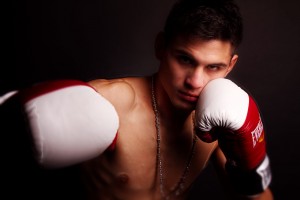 FRESNO, CA– Never has the term “promoter” seemed more appropriate than when listening to promoter and event organizer, Rick Mirigian talk about his new fighter, a soft-spoken, 18-year-old, 132-pound farm boy named Jose Ramirez. The kid’s already put up the kind of amateur record that invites comparisons to De La Hoya, Mosley, Vargas, and other greats of the sport. He won the California Golden Gloves championship earlier this month with ease, he puts punches together like a professional, and his defense reminds the viewer of Willie Pep and Pernell Whitaker. Next week in Indianapolis, Ramirez is the favorite to win the title at his weight at the national Golden Gloves competition. Barry Hunter, who trains professional Lamont Peterson, projects Ramirez as a potential champion in the pro ranks.

Talking to Ramirez’s team, two things immediately strike home. The first is that these are guys who truly believe in this kid. There is none of the sense of exploitation or meal ticket riding that one generally gets as a vibe coming off of the Bob Arums and Don Kings of the world. To watch Ramirez and Mirigian play basketball together at the gym or verbally bust on each other at a Mexican restaurant is to watch a relationship that is more father-son than promoter-fighter.

The promotional side is all well and good, but at some point the kid is going to have to get into an arena in London, at the 2012 Olympic Games, and actually hit somebody. On that front, he is in good hands. Trainer Armando Mancinas has a very good sense of the kid’s strengths and weaknesses. In a sparring session at Main Event Gym in Fresno, Ramirez fought 19-year-old, 140-pound Michael Islas, who will be making his pro debut later this month and who has to his credit a second and a third-place finish at the US Nationals in his own amateur career.

Ramirez carried the action early in sparring, showing a strong ability to come forward, exert pressure, and throw vicious right hooks to the body that reverberated through the old-school gym like the seismic activity for which the Golden State is so well known. Ramirez showed in sparring a lot of the same power he’d shown in his amateur fights. He also showed his weakness; a tendency to go straight back rather than out to the side and to let up on his pressure and let his opponent escape rather than moving his hands when he has his foe on the ropes. Mancinas said that he is working with his fighter to ensure that those flaws will be corrected, but to this reporter’s eyes, there is a potentially major structural issue there that will have to be fixed if Ramirez is to go anywhere in the pros.

This is not to say that Ramirez lacks technical skill, especially for a kid his age. At 18, he has the ability to throw combinations, to keep his hands moving, and especially to double up on the right hand in a way that many professionals who are years older would be hard-pressed to match. The kid has knockout power and already has two money punches—a right-to-the-body, left-hook-to-the-head combination that he has used to end fights in the amateurs already (indeed, the hook to the body reminds the observer of Micky Ward), and a right uppercut pulled back to another straight right hand that suggests no loss of power after the blow. The kid’s video and stills are eye-catching. There was no sign of that straight-back weakness at the California Golden Gloves (suggesting perhaps a bit of nervousness in sparring on the part of the kid with a national media guy at ringside) and it is clear that with additional training he will be able to give so many angles that there is little doubt of his pro potential.

Mentally, something else jumps out as well. A lot of times, if you talk to a young fighter about what he would do if he were to lose a fight, you’re likely to anger the kid, who will protest that he would or could not lose. Ramirez exudes a different kind of confidence, a sangfroid that illustrates his maturity. He said, “If I lose, I’m going right back into the gym and I ain’t gonna lose again.” Determination, rather than overconfidence, suggests a kid who is not going to buy into his own hype until he has a belt around his waist.

These are very hard times for USA Boxing. At the 2008 Olympics in Beijing, the United States garnered only a single medal, a bronze for Deontay Wilder, who in the pros has compiled a 15-0 (15KO) record on the kind of hobo circuit that brings to mind Homer Simpson rather than Muhammad Ali. The general perception of American amateurs is that the US has a long way to go to get back among the world powers in the amateur game, and we need guys who are going to commit themselves to excellence and to carrying the sport forward rather than getting exposed the first time they face real competition in the professional ranks.

So where does Jose Ramirez fit into this? A Saturday afternoon in Fresno watching him spar, talking to his trainer and his promoter and Ramirez himself, and getting immersed in his world would be enough to sell anybody on his potential. This kid is the real deal. He trains like a pro, punches like a pro, and carries himself like a pro. This kid is someone that is going to carry the torch for great American boxers at the lower weight classes. He is already ranked number one at 132 pounds by USA Boxing and is the favorite at the nationals. He’s also likable, soft-spoken, and polite with the kind of looks that could make him a bankable, crossover household name. If you happen to find yourself in Indianapolis for the national Golden Gloves tournament, and you truly love boxing, you owe it to yourself to check this kid out. You’ll be able to say that you saw him first, and you can thank me later for cluing you in.

Fox Doucette is convinced that nobody but his girlfriend and his mother read these little blurbs at the bottom of the article. Proof to the contrary, and promoter inquiries about coverage of US Olympic 2012 prospects, can be sent to beatcap@gmail.com. Find Fox on Facebook at facebook.com/MysteryShipRadio.