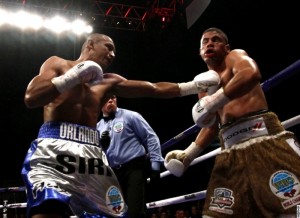 Welcome to another Monday Rant, boxing’s Happiest Place on Earth!

Another amazing weekend of boxing…it’s just a damn shame that, relatively speaking, not that many people really saw it. Wouldn’t it be great if the larger audiences were exposed to the good stuff as opposed to the mismatches that somehow find their way to mainstream PPV shows? Sadly, the same 1.5 million people who always watch boxing were the only ones treated to two outstanding and exciting battles Saturday night.

* Just playing Devil’s Advocate here, but how different would things have turned out if Andre Berto had decided to box, use the jab, and play smart the first three rounds? Taking nothing away from Victor Ortiz’s awesome performance, but Berto sure did his best to accommodate Ortiz’s push.

* How did ESPN’s Dan Rafael manage to score Berto-Ortiz 113 to 112 in Berto’s favor? Did he score the fight from the Foxwoods men’s room?

* Lopez-Salido referee, Roberto Ramirez Jr. is officially the bravest man in the world. To jump in and stop a Juan Manuel Lopez fight in Puerto Rico at a very questionable moment is like trying to slam Manny Pacquiao at an Examiner.com staff meeting. In this humble crank’s opinion, the stoppage was too quick, but you have to admire the ballsy call– by a guy who actually resides in Puerto Rico!

* Thank Bob Arum for ruining a potential classic by sitting on Gamboa vs. Lopez out of spite and greed. Fans could’ve been abuzz about a super-fight, instead, they’re stuck with an increasingly fragile Lopez and a Cuban Wonder with, almost literally, nobody of note to fight.

* Can we please get one scandalous Floyd Mayweather Jr. story where the source isn’t Bob Arum or Michael Koncz? And if Team Pacquiao insists on dishing the dirt on “Money,” is it too much to ask for boxing’s so-called journalists to do some work and mention the actual source of the “scoop?”

* Mayweather and 50 Cent ringside at Berto-Ortiz reminded me of just how much of an enemy Mayweather is to the fans. If he wants to cynically waste his unique talent, he should at least have the decency to avoid boxing shows. Mayweather should really be hanging with guys like MC Hammer instead of 50 Cent because, in ten years, he’ll have a lot more in common with the dead-broke creator of “2 Legit to Quit.”

* Amir Khan is supremely gifted, but he is little more than a big, dumb jock when it comes to his ring work. Maybe the kid’s boxing IQ will pick up with experience, but right now, he seems to be almost shockingly unable to think on his feet. When a top 3 world talent can’t solve the “riddle” of Paul McCloskey, something just isn’t clicking.

* This won’t be the first or the last time Ring Magazine’s rankings get a punch in the kisser on the Monday Rant, but the case of David Lemieux perfectly illustrates the flaws in their ranking system. Prior to his loss to Marco Antonio Rubio last week, Lemieux was ranked #10 by the magazine in their middleweight rankings. Now, please make the case for Lemieux being a Top 10 fighter when, despite his potential and charisma, he had not beaten anybody of real note. This is the flaw when it comes to rankings based solely on opinion– even if the opinion comes from a panel of “experts.” Those who get more press and more attention will always get a higher ranking. It’s the nature of the beast– Fighters are ranked higher when they get more publicity and exposure. Ring Magazine may be the best of a sorry, sorry bunch, but boxing doesn’t need an opinion poll, it needs real rankings that actually let you know who is accomplishing more in each division.

* This just had to be shared. From our forum, The Boxing Tribune Blue Corner (The BTBC), on the subject of how many Ivan Calderons equal one Dan Rafael:

Don Flamenco: “If you take a suit of his, one Calderon in one leg, another in the other leg, figure about a half a Calderon to fill out the waist and then two in the jacket–5.5 total.”

If you want a hard-hitting, insightful, and often hilarious place to talk boxing without having to deal with teenage trolls and internet tough guys, come check out The BTBC. All of The Boxing Tribune writers are active members of the forum and always 100% accessible to readers.

Ok, that’s all for this week. As usual, there are plenty of ways to get a hold of me, whether it be for a compliment or some nasty, creative insults. See y’all next week.

You can email Paul at paulmagno@theboxingtribune.com, follow him on Twitter at www.twitter.com/boxing BTBC or check him out as he officiates cock fights in Michoacan, Mexico. Paul is a full member of the Burger King Kid’s Club.