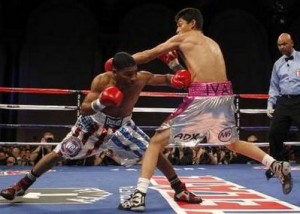 After a supremely significant 30-day run, the dust in the featherweight division has finally settled. Here’s a look at boxing’s 126 lb. division– where’s it’s going, where it’s been, what’s in store :

Yuriorkis Gamboa (20-0, 16 KOs) affirmed his dominance of the division with a four-round annihilation of super featherweight belt holder, Jorge Solis (40-3-2, 29 KOs. Gamboa looked like an unstoppable force against the tough Mexican veteran, drawing comparisons to a prime Roy Jones jr.

Veteran champ, Chris John (45-0-2, 22 KOs) from Indonesia kept his name in the mix by besting countryman, Daud Yardon (27-2, 21 KOs) over twelve rounds. John, despite being the longest reigning champ of the division, is unlikely to face any of the other recognized faces at 126. The WBA titlist seems content on staying at home after a couple of bad experiences (a controversial draw with Rocky Juarez and a forced rematch) when previously venturing into the U.S.

Johnny Gonzalez (48-7, 42 KOs) re-established his name on the world class stage by stopping Japan’s Hozumi Hasegawa (29-4, 12 KOs) in four rounds. Gonzalez, a former bantamweight world champ, is exploring his future possibilities while Hasegawa, with KO losses in two of his last three (at bantamweight and featherweight), seems to be on the outs.

Slugger, Daniel Ponce de Leon (41-3, 34 KOs), who moved up to 130 for a controversial loss to Adrien Broner, has expressed his desire to return to the featherweight division, where he is still rated #6 by the IBF and #3 by the WBO.

In a battle of prospects, Miguel Angel “Mikey” Garcia (25-0, 21 KOs) was just too skilled and seasoned for the game Matt Remillard (23-1, 13 KOs), dropping the Connecticut fighter three times en route to a tenth round stoppage. Garcia. ranked #1 by the IBF, is in line for a shot at the now-vacant IBF featherweight strap formerly held by Yuriorkis Gamboa (and lost for refusing to be weighed-in prior to his bout with Solis.) Garcia will likely take on Jorge Lacierva (39-7-6, 26 KOs), who beat Fernando Beltran Jr (35-5-1, 19 KOs) in an official IBF title eliminator earlier this month to fill the organization’s vacant #2 slot.

Former bantamweight and super bantamweight star, Rafael Marquez (39-6, 35 KOs) is set to return at the Staples Center, June 4th, on the Julio Cesar Chavez Jr. – Sebastian Zbik undercard. An opponent has yet to be named.

Click Link Below for a look at Boxing’s Fairest and Most Accurate Rankings: