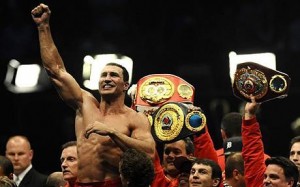 Appropriately enough, the men of boxing’s heaviest division have the heaviest burden to bear when it comes to generating any sort of buzz or mainstream excitement the sport desperately needs. Casually ask any guy you meet on the street who the heavyweight champion of the world is, and he is just as likely to reference an MMA fighter as he is one of the Klitschko brothers.

Obviously the little guys are doing all they can.  But if boxing is to make any headway with mainstream sports fans, and with the Manny Pacquiao vs Floyd Mayweather battle seemingly destined only for internet message board purgatory rather than the actual ring, boxing’s big boys are going to have to step up. As luck would have it, there will be ample opportunity for them to do so over the next few months.

Let’s have a look at the notable upcoming match-ups currently scheduled over the next few months.

The NFL lockout may be just what the doctor ordered. Not necessarily because either guy will actually end up doing anything worth noting in the division, but anytime athletes crossover to other sports it garners a lot of interest and attention. Luckily for boxing, the Baltimore Ravens’ Tom Zbikowski (3-0-0) and Ray Edwards (0-0-0) of the Minnesota Vikings have traded in the shoulder pads and cleats for mouthpieces and boxing gloves.  Sure, it’s most likely only until the NFL lock-out is sorted out, but who knows? Maybe one or both of them catch the fever and devote themselves full time to the sport.  Minimally though, boxing fans can expect to see how NFL players look off the field and in the ring.

Formerly vanquished opponents of the reigning two-headed championship monster that is Team Klitschko are working their ways back to contender status as fast as they can. The speedy and skilled Kevin Johnson is set to be the first American to fight in a Prizefighter tournament.  The 18th installment of this one-day event will feature 8 fighters to compete for the tournament title all on the same day. While Johnson was unimpressive in his loss to Vitali Klitschko in December of 2009, it was his only loss as a professional.  Any shot of him getting another crack at a title rests on him not only winning the tournament but doing it impressively against some semi-notable competition (e.g. Fres Oquendo, Martin Rogan).

Chris Arreola has won two fights in a row after a heartbreaking majority loss to Tomasz Adamek in a fight that could have gone either way. Arreola is skilled with significant power in both hands, but he doesn’t seem to possess enough skill or power to push himself away from the dinner table.  Still, a commitment from Arreola to becoming a real contender could go a long way to securing his future. Arreola has found himself back on a Showtime card in May.

Tony “The Tiger” Thompson isn’t “grrrreat!” like his cereal pimping namesake, but he is a decent fighter that has put together a solid career.  Since losing to Wladimir Klitsckhko in 2008, Thompson has strung together 4 victories including TKOs of both the previously undefeated Chazz Witherspoon and former contender Owen Beck.  Thompson is, if nothing else, a consummate professional who keeps winning the fights he should win.

Boxing fans tend to lament the loss of days gone by. So, while most would agree that the days of Evander Holyfield, Lennox Lewis and Mike Tyson are over, the first fighter named on that list would certainly not. Carrying a very minor title belt (World Boxing Federation), “The Real Deal” is still trudging along trying to secure another title shot.  The four time ex-champ let a lot of the fans he still has down when his last fight was stopped prematurely because of a cut from a head-butt. Still, Holyfield has shown the ability to beat up on tomato cans until he steps up to the championship level.  But one has to wonder, for one night could all the stars align?  Could he turn back the clock or maybe just get lucky with one punch à la George Foreman and become the oldest heavyweight champion ever? Only time will tell, and even though Evander has little of that time left in his career, he still has a big name and a warrior’s demeanor.

Wladimir Klitschko and David Haye have been talking about fighting each other almost as long as Floyd Mayweather and Manny Pacquiao have. The key difference is that it is looking like we will actually get to see the former happen. And boxing needs it to happen in a bad way.

If any fight carries the weight of the entire division on it, it is this fight. Not only must this fight happen, but it has to be exciting. Something tells me if Wladimir Klitschko jab-jab-holds his way to a boring decision, the heavyweight division just might implode on itself. Lucky for us, Haye appears to have the skill, speed and power to take the fight to Klitschko. Equally lucky for us is the fact that both fighters have somewhat questionable chins.

The fight has it all. David Haye is a former cruiserweight who talks trash better than any other fighter on the planet. Wladimir Klitsckho is the giant champion busting his way through opponents like Ivan Drago in Rocky 4. This is the fight the sport needs and the fans want.

After this fight, if you ask someone who the heavyweight champion of the world is, chances are you’ll get the answer you want. It’s a boxer.

So no matter what, if you like heavyweight boxing, you have plenty to look forward to. New fighters are taking the stage and bringing attention to the sport, young and old contenders are working their way back to more title fights and the most anticipated heavyweight championship fight in years is on its way.