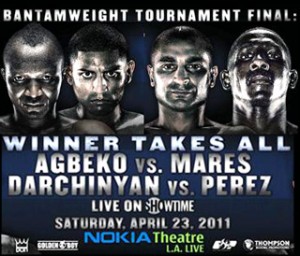 Despite the cancellation of the Abner Mares-Joseph Agbeko bantamweight tournament finals bout this Saturday, the undercard attraction of Vic Darchinyan vs. Yonnhy Perez will go on.

Agbeko officially pulled out of the contest yesterday due to sciatica (a nerve condition affecting the lower back and, often, the extremities) and, despite a mad dash to find a replacement opponent for Mares, none could be found on such short notice.

However, the consolation bout of Showtime’s bantamweight tournament will go ahead as planned. No word, yet, on when the main event will be re-scheduled.