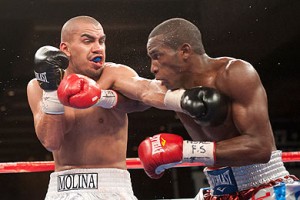 Jr. middleweight Carlos Molina (17-4-2, 5 KO) will take on Allen Conyers (12-4, 9 KO) tomorrow night. Molina-Conyers will be held at the Cosmopolitan Resort in Las Vegas, Nevada, and will serve as the main event for ESPN’s Friday Night Fights, after an injury sustained by Victor Cayo forced the cancellation of his jr. welterweight fight with Lamont Peterson.

Conyers is coming off a surprising 10-round unanimous decision upset victory over previously unbeaten prospect, James De La Rosa, in January. Conyers floored De La Rosa 3 times in the fight, winning by scores of 95-92 (twice) and 94-93. Prior to his upset of De La Rosa, Conyers was inactive for more than 28 months, following a 5-round TKO loss to Said Quali in 2008.

Molina last fought on March 25th against Cuban prospect Erislandy Lara, in a bout that was intended to be an easy out for Lara. After 10 close rounds the bout was scored a majority draw, 95-95, with judge Richard Houck’s scorecard reading 97-93 in Molina’s favor.