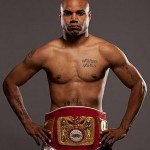 Carson Jones (33-8-2, 23 KOs) will defend his minor welterweight title against Allen Conyers (12-6, 9 KOs) in a 12-round fight headlining a card at the Crowne Plaza Hotel in Tulsa, Oklahoma on Thursday night. Jones, the 25-year-old journeyman from Oklahoma City, is making his first appearance of 2012 after a busy 2011 that included five appearances. Four of Jones’ eight … END_OF_DOCUMENT_TOKEN_TO_BE_REPLACED 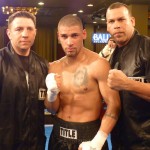 photos and ringside coverage by Gary Purfield Emerging welterweight, Ronald Cruz 16-0 (12 KO) won a lopsided decision over Allen Conyers 12-6 (9 KO) in the main event of the Peltz Boxing card held at Bally’s Atlantic City Saturday night.  The hot prospect Cruz was riding an eight-fight knockout streak and had the support of a large contingent of fans from his nearby hometown … END_OF_DOCUMENT_TOKEN_TO_BE_REPLACED 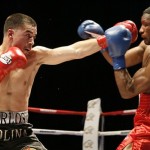 By Fox Doucette There is a vocal subset of boxing fans who love gritty underdogs, lunchpail guys, and guys who may never be world champions but always put on a good show. ESPN gave us what we crave on Friday Night Fights this week, as anyone with a computer and access to ESPN3.com got another helping of action from Carlos Molina, last seen giving Erislandy Lara his wakeup … END_OF_DOCUMENT_TOKEN_TO_BE_REPLACED 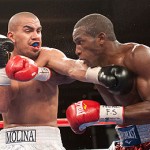 Jr. middleweight Carlos Molina (17-4-2, 5 KO) will take on Allen Conyers (12-4, 9 KO) tomorrow night. Molina-Conyers will be held at the Cosmopolitan Resort in Las Vegas, Nevada, and will serve as the main event for ESPN’s Friday Night Fights, after an injury sustained by Victor Cayo forced the cancellation of his jr. welterweight fight with Lamont Peterson. Conyers is … END_OF_DOCUMENT_TOKEN_TO_BE_REPLACED