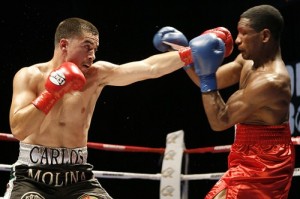 There is a vocal subset of boxing fans who love gritty underdogs, lunchpail guys, and guys who may never be world champions but always put on a good show. ESPN gave us what we crave on Friday Night Fights this week, as anyone with a computer and access to ESPN3.com got another helping of action from Carlos Molina, last seen giving Erislandy Lara his wakeup call on FNF March 25. Many thought Molina won that fight (this writer had it 95-95, as did two of the three judges, for a majority draw), and ESPN’s matchmakers seized upon that buzz to put Molina (18-4-2, 6 KO) in with journeyman junior middleweight Allen Conyers (12-5, 9 KO).

Molina came out early having clearly learned a lesson—to win on television, it is best to put punches together, move your hands early and often, and keep your opponent off of you. Joe and Teddy on the broadcast repeatedly pointed out that the only thing standing between a majority draw and an upset win over Lara was Molina’s taking something off the gas pedal, either due to lack of conditioning or a false sense of having the fight at hand, during that fight. Conyers has a reputation as a big puncher capable of landing a knockout shot, and that further underscored the need for Molina to do what he does best—box on the outside, stay behind his jab, and not give his opponent an opening.

With one small exception, Molina did exactly that. A flash knockdown in the fourth, as Conyers caught Molina coming in and knocked him off balance to the point where his gloves touched and referee Tony Weekes gave him the eight count, led to a rarity in the fight game—the 10-10 knockdown round. However, as Teddy Atlas was quick to point out, Molina won that fourth round. The knockdown was the only clean shot Conyers landed during the course of the entire fight.

By the seventh, the dominance job was complete. Molina landed a sharp one-two combination to the head of Conyers, following a distraction of a left hook with a devastating straight right hand that gave Weekes the excuse he was clearly looking for to step in and stop the beatdown before it got any further out of hand. Molina got a TKO victory and a potential launching pad to a newly promising career, and Conyers got himself a ticket to “opponent for prospects” status in his own career.

The co-feature gave us eight rounds of lightweight action between Hylon Williams Jr. (14-0, 3KO) and a tough-but-overmatched Marcos Herrera (6-5-1, 2 KO). The fight was what you’d expect from a fast-handed guy who was long on speed and short on power. With the exception of a stretch between the second and fourth rounds, when Williams clearly had in his head that he wanted to dispel the myth that he’s punching about 30 pounds below his weight out there and thus stood way too close to his short-armed, slugging opponent, the unbeaten put on a display of quantity over quality in his punches, keeping Herrera at a distance and cruising to a 79-73 (twice), 77-75 unanimous decision. The Boxing Tribune had it 79-73, giving the third round to Herrera, but judge Al Lefkowitz at ringside clearly saw fit to reward Herrera for landing the cleaner, harder punches in all three of those rounds in which Williams gave up his advantage as a fighter. Give credit to referee Russell Mora—where many referees would be too quick to break fighters on the inside, Mora let them fight as long as hands were free.

And finally, in the “Look, Ma, I’m on TV!” swing bout to round out the two-hour broadcast, we were treated to a public service to insomniacs presented by Cuban heavyweight Glendy Hernandez (7-0, 3 KO) and walking bowl of marmalade Ken Frank (4-2-1, 2 KO), who came in at 287 pounds and looked like Santa Claus shaved the beard, got a bunch of tattoos, and took up boxing. At some point during the third round, Hernandez and Frank decided, like a bickering couple, to stop fighting and just cuddle. There were more hugs than an episode of Barney and Friends in a fight that thankfully ended after four rounds, with Hernandez winning 40-36, 39-37 (twice). The Boxing Tribune had it 39-37 for Hernandez.

Fox Doucette covers Friday Night Fights for The Boxing Tribune. If you think those jokes about Ken Frank were bad, you should’ve seen the ones he rejected. Find him on Facebook at facebook.com/MysteryShipRadio.