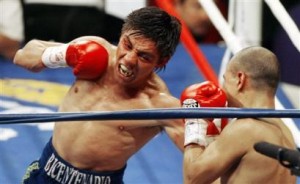 Due to Manny Pacquiao’s takeover of the Cinco de Mayo weekend and the falling apart of the Humberto Soto-Urbano Antillon rematch, Jorge “El Travieso” Arce will be the only major Mexican fighter booked to see action over the traditionally boxing-heavy Mexican holiday.

Other than the red-headed phenom, Saul “El Canelo” Alvarez and, possibly, the second generation buzz created by Julio Cesar Chavez Jr., the biggest draw in Mexican boxing is Arce, the scrawny Los Mochis, Sinaloa native with the loud mouth and crooked smile.

Although Mexico currently boasts the supremely skilled Juan Manuel Marquez as well as a host of other established talents like Humberto Soto, Jhonny Gonzalez, and Fernando Montiel, only Arce has had crossover success in his home country.

The image of Arce sucking on his trademark cherry lollipop and sporting a black cowboy hat while making his way to ringside is the Mexican boxing equivalent to a scowling Mike Tyson stoically storming to the ring or Prince Naseem Hamed front-flipping over the top rope.

From reality shows to daytime talk shows to late-night infomercials peddling “miracle” salve, “El Travieso” has captured the hearts and minds of the mainstream Mexican. As an over-achieving “every man,” Arce has struck a chord with many, who identify with the concept of an earnest underdog who doesn’t always win, but does his best with what he has.

Inside the ring, however, Arce’s recent accomplishments fall behind his level of success as a Mexican pop culture figure.

Always a rough competitor quick to fall into brawling mode, the 31-year old version of Arce is even more so. The current “El Travieso” is all piss and vinegar. Never a defensive wiz, the little defense he once employed has been replaced by a flat-footed stubbornness and a desire to walk right through everyone he meets.

As a jr. flyweight and flyweight, that strategy paid off, earning him twelve stoppage victories in fifteen world title-level contests, including a seven-in-a-row KO/TKO stretch from 2004 to 2006.

Close Arce followers will point to the two Hussein Hussein fights (TKO 10 in March of 2005 and a TKO 2 rematch seven months later) as the beginning of the end for prime “Travieso.”

The first Hussein bout was a brutal classic, the type of bloody war that takes years off of a career. The follow-up was short and sweet, ending in a still-controversial second round corner stoppage by Hussein’s trainer, Jeff Fenech. If the first Hussein war took something out of Arce, the second convinced him that, not only could he walk right through some opponents, but that it was actually expected of him.

It was also right around this time that Arce became a mainstream star with his appearance on Mexico’s version of the Big Brother reality show.

A climb in weight accompanied his climb into crossover status.

Arce would move up to the super flyweight limit, scoring a couple of impressive wins before dropping a one-sided unanimous decision in an unsuccessful bid to dethrone reigning WBC 115 lb. champ, countryman, Cristian Mijares in 2007.

Then, Arce dabbled in some bantamweight action before moving back down to the more reasonable super flyweight limit, where he managed to grab a WBA interim world title over tough Rafael Concepcion.

Vic Darchinyan would put an end to Arce’s bid to win the full world title when the Armenian “Raging Bull” stopped him on cuts in the eleventh round of their 2009 battle.

Arce would get another world title bout at 115 lbs. just about seven months after the Darchinyan loss. This time, he would drop a relatively one-sided unanimous decision to South Africa’s Simphiwe Nongqayi for the vacant IBF super flyweight belt.

Boxing politics being what they are, he would find himself in yet another title shot less than four months after the Nongqayi loss, this time winning the vacant WBO super flyweight title against Indonesia’s Angky Angkota via seventh round technical decision.

Rather than defend the title, Arce would immediately vacate and bypass the stacked and deadly bantamweight division in favor of the less-populated jr. featherweight class.

With a 3-0-1 record at the 122 lb. limit against marginal opposition (The draw being widely regarded as a poorly scored gift in Arce’s home state against Venezuela’s Lorenzo Parra.), Arce is leapfrogging several levels and going straight at WBO champ and The Boxing Tribune’s #2 ranked jr. featherweight, Wilfredo Vazquez Jr. on the pay per view undercard of May 7th’s Manny Pacquiao-Shane Mosley card at the MGM Grand in Las Vegas.

In Vazquez, Arce will find a fresh, talented well-trained and undefeated champion on his way to bigger and better things. The second generation Puerto Rican star is quicker, bigger, and infinitely more talented than Arce and has already, on a couple of occasions early in his career, passed the gut check test in tough spots– a hard-fought draw against Jorge Cardenas in Mexico as well as a foul-filled DQ win over Colombia’s Felipe Almanza in 2007 and 2008, respectively.

Simply put, Vazquez is a star on the rise, just pulling into his physical and mental prime as a fighter while Arce’s better days were years ago, two and three divisions to the South of where he stands today. Obviously, most everyone outside of Arce’s own team, lists the Puerto Rican champion as an overwhelming favorite.

Just don’t tell that to Arce.

“I hear the critics. [but] They’ll be wrong. The Mexicans are hyped for this fight,” Arce told El Noroeste, a newspaper from Culiacan, Sinaloa. “Hernan ‘Tyson’ Marquez, Orlando Salido. I’m next. I’ll shut all of their mouths.”

“El Travieso” speaks like he fights, aggressive and full of a bluster born of bullish pride– another reason the Mexican mainstream has latched on to him.

People like Arce don’t go down easy and, based off of the recent rash of surprising wins from underdog Mexican fighters abroad like “Tyson” Marquez, Salido, and Jhonny Gonzalez, there is definitely some inspiration to draw upon for the Los Mochis native.

Throw in the famed and heated Puerto Rico vs. Mexico rivalry and Vazquez Jr.-Arce should be a can’t miss good time.