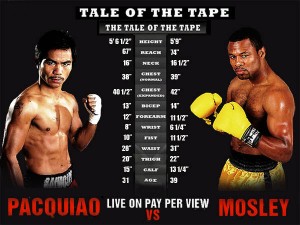 Manny Pacquiao remains the heavy favorite to beat Shane Mosley this weekend and most experts have already made their picks. Here’s a look at what four members of the The Boxing Tribune writing staff have to say about this Saturday’s pay-per-view clash:

Shane Mosley is the overwhelming underdog to Manny Pacquiao, the man who has cut a path of destruction through “Who’s Who list of 2007”. Pacquiao is expected to make Mosley his next victim. Mosley, however, brings much more to the table than Pacquiao’s opponents above the 130-pound weight class, despite his 39 years. Mosley has a stellar right hand which, if used to time the highly-rhythmic Pacquiao, can catch him hopping in and inflict some serious hurt. Mosley’s left hook, which has a tendency to leave a lot to be desired, can also be a formidable weapon, given Pacquiao’s tendency to leave himself wide open to left-hand counters when he leaps in to land his own left hand. On top of it all, Mosley has developed a highly effective “grab and maul” tactic that he uses to his advantage. He should be able to wear down his smaller opponent. Unfortunately, Mosley’s best chances lie within the first 5 rounds. Most give Mosley 3 rounds to run out of gas, as was the case in his May 3010 fight with Floyd Mayweather, but Pacquiao will come to Mosley and make him move less, giving him a longer period in which to be effective. I’m calling Pacquiao to win a comfortable unanimous decision in this fight, most likely in the 116-112 range.

Back during World War II, the need to conserve fuel so it could be sent to the troops led to people asking themselves “Is this trip really necessary?” whenever they started their cars. I had the same thought while thinking about this fight. Do we really need to see Bob Arum line his pockets as Manny Pacquiao beats up another past-his-prime “big name”? Shane Mosley couldn’t even beat Sergio Mora, fercrissakes. Pac will knock Mosley out in four rounds, the hype machine will give him a Roman triumph that would put Scipio Africanus to shame, and we’ll all move on to watching the press corps start talking up Kermit Cintron like he’s Ivan Drago. Is this trip really necessary?

Shane Mosley will upset Manny Pacquiao. I’ve had a hunch about this fight for awhile now, and the weeks leading up to the fight have done nothing to sway me in the other direction. Mosley has the perfect blend of speed, power and accuracy to give Manny some real problems. Some fighters have fast hands. Some have power. Really good fighters have both. But the very elite fighters possess power, speed and impeccable accuracy. Having all three allows a fighter to consistently counter his opponent as they come in. Mosley possesses all these attributes plus world championship caliber experience. Moreover, I believe Shane is the naturally bigger, stronger fighter. Pacquiao will have some success (he’s too good not to), but Mosley will catch him with something hard early and often enough to rock Manny. It will be a back and forth affair in the middle of the fight, but as the later rounds unfold, I expect Pacquiao to tire and become even easier for Mosley to hit. When the final bell sounds, I expect Shane Mosley to come out with a well earned victory by unanimous decision.

As I said in this week’s Magno’s Monday Rant, I’m putting my money where my mouth is and pegging Shane Mosley to pull off the major upset. “Sugar” Shane represents an infinitely more complex fight than anyone Pacquiao has encountered since his last bout with Juan Manuel Marquez. Mosley has everything he needs to handle the Filipino Phenom, but the question remains whether, at 39-years of age, the Pomonoa, CA native. I’m counting on one final performance from Mosley against a Pacquiao who has had things way too easy for way too long. Shane won’t win a decision, but I’m betting on his straight right hand finding a home and doing the impossible…Mosley via TKO 10!