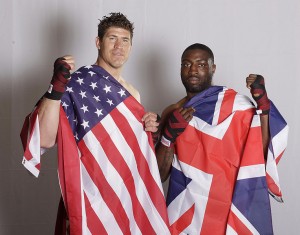 This Saturday’s Prizefighter International Heavyweights tournament will battle the curious case of Evander Holyfield vs. Brian Nielson for what really, really hardcore boxing fans spend their time focusing on in addition to this week’s main attraction, the Manny Pacquiao vs. Shane Mosley PPV.

Let’s face it, this weekend anything in the boxing world other than the Pac-Mosley PPV card is only an afterthought.

That being said, the winner of this week’s Prizefighter card could position himself nicely for a future fight, possibly even a world title shot.  After all, besides the two-headed Klitsckho champion and WBC titlist David Haye, the heavyweight division isn’t exactly shoulder deep in a pool of ready-to-contend-now talent.

This edition of Prizefighter adds an international flair to the mix as most of the fighters hail from outside the U.K., the most notable being former title challenger Kevin Johnson.  Johnson, whose claim to fame is going the distance with Vitali Klitsckho, is considered one of the favorites going in to the event along with the 6’8” behemoth southpaw Tye Fields.   One other notable contender includes the current Prizefighter Heavyweight champion Michael Sprott from the U.K., who was the last man standing during last September’s competition.

If you’ve never seen a Prizefighter tournament, here’s a rundown on how it works.  The night begins with four quarterfinal matches.  The four winners advance to the semi-final bouts with those two winners squaring off for the championship.   Each bout is scheduled for three standard three-minute rounds.   Think of it as a cross between the Elite Eight in college basketball and a K1 kickboxing Grand Prix tournament.   All of it happens on one night from start to finish.

Interestingly enough, the field was infinitely more interesting as recent as just last week.  Originally scheduled to appear on the card, former cruiserweight titlist Juan Carlos Gomez and past heavyweight title challenger Fres Oquendo each had to bail out of the tournament because of personal issues.  Gomez had problems with his visa and Oquendo is mourning the death of a close personal friend.

Needing to fill the gaps in short order, the promoters of the card secured rather unheralded replacements in Kerston Manswell (20-1) and Lucian Bot (14-0-1).

Still this is boxing.  The fights themselves can be entertaining as long as the styles match up right, and with the spectacle of a one night only tournament mixed in with the real-live contender status of some of the participants, this Saturday’s Prizefighter International Heavyweights tournament could be worth getting excited about.

That is if you need more than Manny Pacquiao vs. Shane Mosley to get you through the weekend.