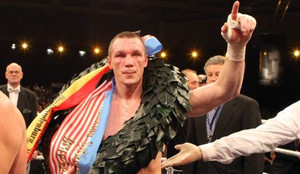 On Saturday, May 7, IBF middleweight champ, Germany’s Sebastian Sylvester (34-3-1, 16) will attempt to make the fourth successful defense of his belt against Australian contender, Daniel Geale (24-1, 15 KOs) at the Jahnsportforum in Neubrandenburg, Germany.