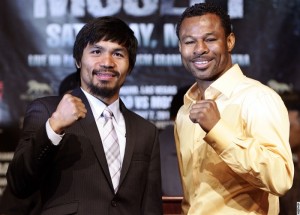 Former 3-division champion, “Sugar” Shane Mosley (46-6-1, 39 KO), has been pegged as the opponent for Manny Pacquiao’s (52-3-2, 38 KO) next defense of the WBO welterweight title he won from Miguel Cotto in November of 2009. Mosley’s best days, like Cotto, Joshua Clottey, and Antonio Margarito before him, are fading quickly in the rear view mirror.

Miguel Cotto, wide open down the middle, and on shaky and unbalanced legs, was only 2 fights removed from a brutal beating at the possibly-loaded gloves of Antonio Margarito. A soft touch comeback fight against Michael Jennings, in which Cotto captured the vacant WBO welterweight title, did little to prepare him for his next 2 outings; a bloody war that resulted in a close split decision victory over Joshua Clottey, and a 12-round KO loss to Pacquiao.

Joshua Clottey, a former title holder himself, remained inactive following the aforementioned war with Cotto, and was hardly deserving of a shot at the pot of gold that accompanies a signed fight with Pacquiao.

Antonio Margarito, like Clottey before him, had a long period of inactivity following a brutal 9-round TKO loss to Shane Mosley in 2009, due largely in part to a suspension levied on him after he was caught before the fight with Plaster of Paris on the knuckle pads in his handwraps. After 14 months out of the ring, Margarito, now a jr. middleweight, scored a tougher-than-expected unanimous decision victory over welterweight club fighter Roberto Garcia, setting up his showdown with Pacquiao for the vacant WBC jr. middleweight title.

Like the 3 previous Pacquiao opponents named above, Shane Mosley has shown a tremendous amount of vulnerability in his last 2 outings; a May 2010 lopsided unanimous decision loss to Floyd Mayweather, and a September 2010 draw with Sergio Mora. After failing to capitalize on the success of his January 2009 drubbing of Antonio Margarito, Mosley sat on the shelf for 14 months. The time out of the sport may have allowed the last few grains of sand in Mosley’s hourglass to fall, as he has looked every bit his 39 years since the night he turned back the clock and beat Margarito into submission.

When Top Rank Promotions broke the news that Mosley would be Pacquiao’s next opponent, it was not received with the same fan-fare as the previous 3. For a short period of time, the boxing media levied some harsh criticisms on the usually untouchable Pacquiao and his promotional team.

Only 3 months prior to the announcement of Saturday’s fight, Top Rank CEO Bob Arum made the following statement to BoxingScene: “What I’ve read is not very supportive to make any Mosley-Pacquiao bout. Look, he’s going to be 40 and he’s in the lighter weights where speed is so important. He’s on a show with guys — example, 20-year-old Saul “Canelo” Alvarez — old enough to be his son.”

When the figurative 180 was completed, Arum told AOL FanHouse in December: “We believe that Shane Mosley against Manny Pacquiao was the most sellable fight out there not only for boxing fans but also the casual sports fan. Those are the people that we rely on to buy the pay per view.”

Saturday’s pay-per-view showdown between Pacquiao and Mosley has more of the same main ingredients that we’ve seen put together in cooking the legend of Manny Pacquiao – an aging, faded fighter going up against the top dog in the sport, in his fighting prime. Manny Pacquiao is again an overwhelming betting favorite, currently sitting pretty at -600. The outcome of the fight is almost pre-determined, yet the buzz surrounding the fight has grown considerably.

Until now, Pacquiao has been forced to do the heavy lifting mostly on his own, given his immense popularity. His last 2 fights were sold almost solely on his name. His March 2010 title defense against Clottey did well at the live gate, but produced low pay-per-view numbers. Last November’s bout with Margarito fell short at the live gate, but returned solid pay-per-view numbers. The odds for box office success with Clottey and Margarito were admittedly stacked against Pacquiao and Top Rank. Margarito’s career achievements came under fire following his infamous “plaster gate” scandal, and Clottey is unknown to casual fans.

With tickets sold out, and closed-circuit tickets nearly sold out, tomorrow night’s bout against Mosley has all of the ingredients to perform well in pay-per-view sales and at the live gate. Combined with Showtime’s sister network (CBS) and a “Fightcamp 360” series devoted to the network television promotion of the fight, Mosley’s mainstream appeal will lend a huge hand to the box office success of the fight. Mosley’s win over Oscar De La Hoya in 2000 made him as close to a household name that anyone not named De La Hoya, Pacquiao, Mayweather, or Tyson can become.

The odds stacked against Mosley are great, and his chances at victory are slim. While he still possesses a few key tools to derail the Pacquiao Express, his window of opportunity will slam shut if he runs out of gas, as was the case in his last 2 fights. Despite the odds, however, his punching power exceeds that of any of Pacquiao’s opponents to date. In addition, his footwork and balance are better than the Miguel Cotto of 2009, and the stumbling klutz that is Antonio Margarito.

If it seems like we’ve seen this far too often in the career of Manny Pacquiao, it’s because we have. Pacquiao versus Mosley is a lot of the same thing we’ve seen over the last 3 years, with a few factors that make this Pacquiao’s most dangerous fight since his March 2008 scrap with Juan Manuel Marquez. Saturday night will be the same old song and dance…remixed, if you will.