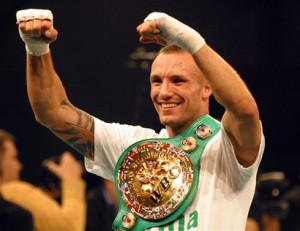 Kessler, of Denmark, last fought in April of 2010, when he took the WBC belt via twelve round unanimous decision from the UK’s Carl Froch. With three separate world title runs in his thirteen year career, Kessler has shared the ring with the likes of Joe Calzaghe, Andre Ward, Froch, Librado Andrade, and Markus Beyer.

Bouadla has fought mostly in his native France and Belgium and has never competed above the regional/national level.

Kessler’s promoter, Kalle Sauerland, has said that “The Viking Warrior,” after the tune-up with Bouadla, will then fight in the United States, possibly against the winner of the Super Six tournament.

When asked about his injured left eye, Kessler insists that he’s still not 100%, but has received the green light from his doctors to resume his career.