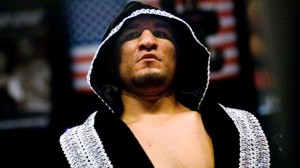 “I hate to lose,” Chris Arreola told a reporter at a press event designed to show off his new appearance.

This slimmed down version of Arreola was propped up next to a scale, slim and trim, brimming with confidence for his next fight.  He wore a smile on his face –one eager with hope.   It’s the smile of a contender.

Chris Arreola has been here before.

It was September of 2009 when the then undefeated Arreola was ready for his first big chance.  He had worn the crown of America’s hopeful heavyweight champion well.  Always dealing with weight issues that kept him from being his very best, Arreola’s talent inside the ring and personality outside of it was still good enough to take him to the very top of the heavyweight mountain–a place where Vitali Klitsckho, and a chance at a world title, was waiting.

Arreola promised to be ready.  He would be in the best shape of his career.   He stood brimming with confidence for his next fight.  He wore a smile on his face –one eager with hope.   It was the smile of a contender.

But Chris “The Nightmare” Arreola’s own nightmare was about to begin.  Coming into the fight a robust 251 lbs, Arreola was beat to the punch at virtually every turn, losing almost every round until the contest was finally stopped at the end of the 10th.

Arreola was just not ready to compete at that level.  He was too heavy.  He was too green.  He needed to re-establish himself.

Next, he destroyed journeyman tough guy Brian Minto in 4 and was then set up to fight former cruiserweight champion Tomasz Adamek.  It was a good tussle, but ultimately it seemed the again 251lb Arreola just could not compete in the championship rounds.  By the end of the contest, his punches seemed sapped for strength, and he ended up losing a close, but clear, majority decision.

Again, Arreola needed to re-establish himself.

Weighing in at 256lbs for his next fight, he appeared to be heading towards heavyweight obscurity.   But, after going the distance with his overmatched opponent, Manuel Quezada, Arreola decided to rededicate himself to getting in shape.  Really this time.

And so now, still holding on to his status as a contender after wins over the unheralded Quezada and an equally unimpressive boxer named Joey Abell, Chris Arreola is trying to win his third fight in row.  The 30-year-old Arreola is scheduled for a 10-rounder with journeyman Nagy Aguilera (16-5, 11 KOs).  It is the co-featured bout of the Super Six World Boxing Classic semi-final on Showtime between Andre Ward and Arthur Abraham.

A now truly dedicated Arreola appears to be in the best physical shape of his career.  He stands smiling, propped up next to a scale, slim and trim, brimming with confidence – you’ve heard this before.  But this time it may really be different.   This next fight could be his second in a row to come in below 250lbs –something he hasn’t done since the middle of 2008.

But he is not quite there yet.

This next fight is a springboard.  A win against Aguilera on Showtime puts Arreola right back in line for a world title shot.  The only question left is whether Arreola, a fighter who already carries the extra weight on his shoulders of being America’s only real heavyweight contender, will be light enough to use it.