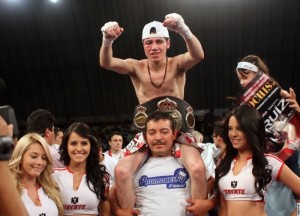 The longer, leaner Ruiz was more effective from the outside and controlled the action from a distance, but Arce managed to turn the fight into an inside war on several occasions and take several rounds.

Arce sent Ruiz to the canvas in the third round with a wide left hook and again in the eighth with a barrage of wild shots.

Ruiz scored a controversial knockdown in the fifth, which replays revealed as more of a push. In the eleventh, the defending WBA interim bantamweight titlist landed a right rand that sent Arce completely through the ropes and to the cement floor.

Both fighters, sensing the fight was likely close, came out fast and furious in the twelfth and ended the bout, both expecting to take the contest.

After the bout, Arce questioned the decisions of referee Robert Hoyle and demanded an immediate rematch. Ruiz agreed and said that it would be an honor.