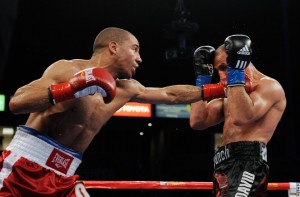 Welcome to another edition of Magno’s Monday Rant, the only boxing column that uses Dante’s Inferno as a reference book and a loaded .44 as an office supply…

American fight fans like to moan and complain about the sport having seen better days. They cry about the lack of real stars and the difficulty in getting the current top fighters to face one another.

And they have a point.

But there’s a difference between bitching with just cause and bitching just for bitching’s sake.

If you’re one of that group of hand-wringing cry babies who just want to sit in sweatpants, eat Cheetohs, and watch old tapes of yesterday’s greats, then nothing’s going to pull you out of your funk.

However, if you’re looking for someone to champion and a fighter to support in an admitted slow era for elite American talent, then Andre Ward should be the first name on your list of fighters to watch.

Floyd Mayweather is too inactive and too brash for many to stomach. Timothy Bradley is, maybe, a bit too crude for hardcore fight fans to appreciate. And Kelly Pavlik is battling booze and an apparent addiction to photo ops with fat chicks.

But Andre Ward is everything that American fight fans have been clamoring for– A clean-living, mild-mannered, Olympic gold medalist with great skill, a tough streak, and a willingness to fight anyone.

For those looking to hop aboard a bandwagon, the best bet is to let it be Ward’s. You’d be getting in on the ground floor of a fighter who should be boxing’s next big star.

Putting aside his pedigree, abilities, and temperament, Ward also has plenty of quality, greatness-defining opposition at his disposal. Carl Froch, Lucian Bute, Andre Dirrell, Kelly Pavlik, and a return bout with Mikkel Kessler are all workable fights that could keep the fighter from Oakland, CA busy for quite some time. Add those names to the fighters Ward already beat– Kessler, Sakio Bika, Allan Green, Edison Miranda, and Arthur Abrahm– and even the most jaded of fight fans have to admit that there is a path to greatness on which Ward can tread.

Saturday’s performance against Arthur Abraham was an entertaining, complete performance and a positive turn from Ward’s last two outings against Green and Bika, which were dominant victories, but frustrating grappling matches that even had Ward’s hometown fans at the Oracle Center in Oakland checking their email and looking around for the ring card girls.

If Ward keeps focusing on a more fan-friendly style and can manage to sign bouts against most, if not all, of the opponents out there, there’s no reason not to be firmly behind his rise to stardom and, perhaps, all-time great status.

The Boxing Tribune already has an outstanding crew of quality writers, but we’re always looking for more soldiers in our war to take the boxing media away from the pompous ego maniacs who make their money from shady side deals with promoters and network interests. We have a content deal with Fox Sports, so any articles could be picked up and posted on Fox’s main page for huge exposure.

Here’s what we’re currently looking for:

* Video content, such as interviews and behind-the-scenes footage
* A dedicated boxing news person
* European Reporting & Analysis
* Interviews
* Current or former boxers who would like to be feature writers
* Feature writers for op-ed pieces and major fight previews

Experience is preferred, but not absolutely necessary. We’re just looking for people who share our goal to reform the boxing media and give the fans fair and even-handed news and analysis. Contact me at the email below for more info.

You can email Paul at paulmagno@theboxingtribune.com, follow him on Twitter at www.twitter.com/boxing BTBC or check him out as he hangs out at Starbucks sipping lattes and scowling at his laptop. Paul is a full member of the Burger King Kid’s Club.