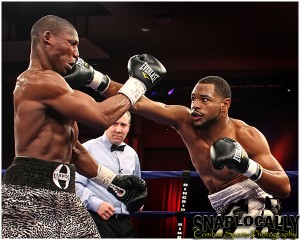 Undefeated middleweight prospect Cerresso Fort (10-0, 8 KO) recently took a few minutes out of his training schedule to talk to The Boxing Tribune. As he prepares for his May 20 comeback fight against Tim Taggart, which will be on the undercard of the professional debut of Minnesota Vikings Defensive End Ray Edwards.

Fort opened up about his amateur background, what he has had to learn on the fly, his career setbacks, and his big opportunity this Friday.

The Boxing Tribune: How did you get started in boxing?

Cerresso Fort: Me and 2 of my friends went into the boxing gym and we  just started. I got in there and I knew I wanted to box.

BT: How old were you when you started?

CF: I was 12 years old when I started

BT: Tell us a little bit about your amateur experience.

CF: I had ….how many fights did I have? I had 121 amateur fights with 18 losses. I fought in numerous national tournaments, and I won 2 national tournaments. I took the bronze medal in the under-19 tournament. Yeah, I had a big, huge amateur pedigree – and I took 2nd place in the Silver Gloves in my first year of boxing.

BT: OK, so that sounds like a pretty successful run there.

CF: Yeah, the losses I had, I learned from each one.

BT: And that’s the best case scenario right there; to learn from losing. So, speaking of learning, how was the transition from being an amateur, coming to the professional ranks? Were there any rude awakenings to the business side of the sport?

BT: When you first began, did you have a manager to help run your career?

CF: Yeah, I have a manager to run my career now, but I didn’t have that at the beginning.

BT: How long was it before you had to go out and sign a manager?

CF: I just got a manager as of last month.

BT: Ok, wow. So when you said you just learned, you really meant it.

CF: Yeah, I was pretty much independent for all 10 fights and this will be my first fight with a manager.

BT: Right. Are you signed exclusively to a promoter?

BT: Has that had any effect on your activity? You’ve been out of action for a while. What were the reasons behind the inactivity?

CF: It wasn’t business – uh my uncle and my brother. See…my brother had gotten shot 14 times, so I had to go to Chicago where my brother was in the hospital. I went to see my brother and he got better, he didn’t pass away. Then my uncle got killed. He was 27 years old. He was driving on a motorcycle and had an accident. I went to the funeral. It was really just dealing with a lot of hurt and losing family and hurtful things.

BT: I’m sorry to hear that, the time off is understandable, really. So, your comeback fight is this Friday at the Grand Casino in Minnesota. Minnesota Vikings Defensive End Ray Edwards’ pro debut is the main event, and you’re on the undercard. Given the attention Tom Zbikowski has gotten, Edwards is sure to get some time in the national spotlight. What does it mean to your career to be getting some exposure like this?

BT: Tell us a bit about your opponent, Tim Taggart, for Friday.

CF: I just know he’s a good fighter, he’s got a winning record and I know he’s coming in there to beat me. He’s a fighter, you know? I can’t say anything bad about him. I’m just ready to go out there and do what I do.

BT: Have you gotten to the point of your career where you’re able to watch film on your opponents?

CF: I don’t watch tapes on these guys I fight, because they could go out and fight a totally different style of fight from what I’ve been seeing on tapes. So me…I never watch tapes. I’ve seen this guy fight in person before, and that’s enough for me.

BT: That’s understandable, and that method is popular out there right now.

CF: I’m a huge believer in this; that a guy you’ve been studying fight one way, he can come out and fight you a whole different way, and it could be a shock to you, you know? It might mess your fight up, it might make you lose a big part of your game plan. It’s like in a relationship, you’re expecting this female to be a good female for you, and she’s not anything like that. Your expectations could be for your opponent to come out one way, and he doesn’t. And that could cost you the fight because you prepared one way.

BT: Of course. Being able to adjust in the ring is important.

CF: Right, it is. See, you can watch tapes and come up with a game plan to beat a guy, and he comes out fighting different, you won’t be prepared. Me, my style, I want to be prepared but be versatile. I want to be ready for whatever.

BT: You recently opened a boxing Gym in Minnesota. Tell us a little bit about that endeavor.

CF: Yes I did. Element Boxing and Fitness, it’s called. We opened it up for the kids in the community of Minnesota. We got group fitness classes, and we teach each individual how to box. We do boxing as fitness. We have high school football players, a few semi-pro football players that come in and work out.

BT: So in addition to owning the gym, you’re also one of the trainers?

CF: That’s correct, I take part in that.

BT: What other kinds of programs do you run out of your gym?

CF: We got a thing that we do for the kids with helping them with their homework on Saturdays. From 12 to 2, which is our open gym hours. So if a kid comes in with his homework and he needs some help we’re there to help. My partner finished college, he got his degree. Me, I finished high school and trade school, so we help these kids out with their homework and teach them how to do things the right way. So me and my partner we’re there for the kids and the community. It’s really a big opportunity. I didn’t expect to open a gym up at the age of 25. Now that we did it I just have to do the right things, and everything is possible through God, and God is great. I’ve got this blessing, so I’ve got to make good things out of this blessing.

BT: Wow, that’s great. OK, man, I don’t want to keep you too long. Do you have any closing thoughts?

CF: Thank everyone that’s behind Team Cerresso Fort. Stay strong and stay behind me, and I promise to get the World Champion Level. So if you’re with me, stay with me.