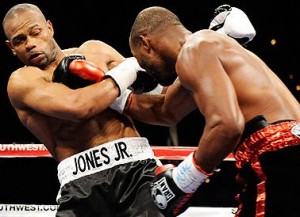 Eighteen years ago this week, a teenaged me watched Roy Jones Jr., 24-year-old boxing wunderkind, fight Bernard Hopkins to a 12-round unanimous decision victory for the IBF middleweight title and recognition as the best in the 160-pound division during what was a very strong time in the sport at that weight. Also in the spring and early summer of 1993, teenaged me watched an awful lot of Beavis and Butt-head. The connection between the latter and the former is very much on display Saturday as both combatants from that epic battle are in action this weekend– one a legitimate challenger to a lineal title, the other a shadow of his former self.

On Beavis and Butt-head, the show began with a standard disclaimer: “Beavis and Butt-head are not real. They’re cartoons. Some of the things they do would cause a person to get hurt, arrested, possibly deported. To put it another way: Don’t try this at home.” I wish someone would say this to Roy Jones. At 42, the speed, skill, flash, and hand speed that allowed him to dart around the ring like a hummingbird, landing punches from all angles, perplexing his opponent before releasing a devastating exclamation point upon the proceedings? Gone. Stick a fork in him. What is left is a shell of a once-great boxer reduced to being just quick enough to think he has a chance and just slow enough to discover, in fist-to-face Technicolor clarity, that he does not. C’mon, Roy. You may be a cartoon nowadays, what with the rap that barely beats the dope rhymes Jon Stewart drops on The Daily Show, but the disclaimer ought to apply. When you’re standing across the ring from Denis Lebedev, remember this: He is a trained professional fighter. Some of the things he does may cause you to get hurt. They may cause you to join the brotherhood of fighters whose brains have more in common with over-stirred Jell-O than the gray matter of Homo sapiens in its unscrambled form. No commission in its right mind should even let a fight like this go on. To put it another way: Don’t try this at home.

Meanwhile, in the blue corner, so to speak, we have Bernard Hopkins, 46, looking more like a contender than a washed-up Old Yeller in need of a woodshed to be taken out behind like Jones. Hopkins is coming off a draw in his last fight with the honest-to-gods light heavyweight champion of the world in Jean Pascal, and I’m going to stick my neck out and predict that Hopkins will win a decision in the rematch.

Since his glory days, B-Hop has lost just about all of his power, his last win by knockout coming over Oscar De La Hoya in 2004, the Golden Boy being at that point in his career about 15 pounds above his natural comfort level as a fighter. The last time Hopkins knocked out someone his own size, Morrade Hakkar, it was over eight years ago, in March of 2003. Yet the pride of Philadelphia continues to go rounds, give angles, and fight like someone who could easily take the wind out of Pascal’s sails this weekend. Until Bernard is decisively beaten, he remains immune to the charge of “too old”, despite being fully six years past the point where one generally draws an arbitrary cutoff of a fighter being too far past his prime.

So what’s the difference here? Jones is younger than Hopkins is. You could make a fine argument that Roy Jones Jr. is the best pound-for-pound fighter of his generation (I won’t, but you could.) Seven years ago, at 35, Roy was the face of EA Sports’ Fight Night video game in its first installment, he had moved up to heavyweight and snared a title on quickness and…well, the chance to fight John Ruiz for it, but still. A puffed-up middleweight grabbing a heavyweight strap? The only man to that point to have beaten Bernard Hopkins aside from the latter’s ill-fated pro debut? This merits a question as to what makes fighters great after age forty…and what causes them to fade into the kind of last-hurrah tragedy that leads to either ugly career-ending KO losses (Muhammad Ali vs. Trevor Berbick, Mike Tyson vs. a grocery store aisle’s worth of tomato cans) or fights so nasty in their poor execution that nobody ever takes the fighter seriously as a PPV draw again (Mosley vs. Pacquiao, Jones himself in the Hopkins rematch)? I have a theory.

Watch Bernard Hopkins fight and what you find yourself watching is the purest, most impressive application of “age and guile beat youth and experience” in any sport, contact or otherwise. It’s watching an ageless NFL quarterback turn himself from a gunslinger into a game manager. It’s watching a mid-80s Kareem Abdul-Jabber rely on the perfect form of his sky hook to become the leading scorer in NBA history. It’s watching baseball players shorten swings, knock fewer balls out of the yard, and hit for average. Hopkins does this in the ring, a lot like George Foreman did at heavyweight during those same mid-90s salad days.

Technique matters. Not for nothing is boxing called the Sweet Science, and not for nothing is the adage “styles make fights” the very core of commentary about the sport. Bernard Hopkins understands this. What he lacks in speed and power at his age, he makes up for in walking his opponent into counter-punches, in never leaving himself too exposed, and in knowing how to fight off the ropes or tie up without getting the referee too agitated to effectively remain on his side when his opponent is too aggressive. There is certainly such a thing as “a knockout puncher”—one need only watch the Klitschko brothers for the ur-example—but Hopkins is a decision fighter. His approach, his game plan, and his pacing all scream out the kind of by-the-book execution one would use if indeed the very goal were to stand, hand raised, at the end of 12 rounds.

By contrast, Roy Jones never figured this out. Deprived of his greatest weapon, he is as helpless as a duel participant with only one pistol, and the pistol has jammed making him a sitting duck for his opponent. Roy Jones still thinks he is a young man. The flamboyance, the rapper persona, the style he still tries to impose in the ring, all are the complete opposite number to a man frequently compared not to a boxer but to a collegiate professor in boxing, namely Bernard Hopkins. Mike Tyson had this same problem. So did Muhammad Ali. So did Brett Favre in football and so does Kobe Bryant, it seems, in the NBA. Not having an effective means to alter one’s game would seem to be the difference between a shot fighter and an ageless wonder.

This, in turn, means we can watch Roy Jones get his brains bashed in by Denis Lebedev on the same night that Bernard Hopkins gives all he can handle to Jean Pascal on Saturday. When Sunday rolls around, we can all talk approvingly of the Philly fighter while the pride of Pensacola tries to unscramble his brains. And we can start arguing over whether the current crop of fighters approaching forty, most notably Vitali Klitschko, will end up more like Hopkins or more like Jones, and those of us in the writing community looking to spill some ink can devote all manner of nutty speculation to this very topic.

But as you, the fan and reader, watch those fights Saturday night, keep one thing in mind. You are watching a living, object lesson in the difference between age and guile…and youth lost without benefit of wisdom to replace it. There is a life lesson in that. One wonders if even the current crop of late-30s professional boxers fully realizes that fact. Enjoy the fights.

Fox Doucette covers Friday Night Fights for the Boxing Tribune and occasionally contributes longer feature pieces. He quite enjoys trying at home things he’s told not to. Find him on Facebook at facebook.com/MysteryShipRadio.