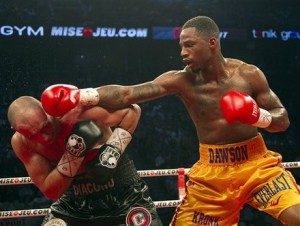 Some guys have all the luck. While we’re praising Bernard Hopkins for executing his game plan to perfection against Jean Pascal, let us not forget what happened on the undercard. Chad Dawson beat Adrian Diaconu, earning himself a shot at Hopkins for the undisputed championship at light heavyweight at some point to be determined in the future.

What this means for Dawson is that he gets to fight a guy who can’t be this great forever, who hasn’t knocked anyone out at his own weight in eight years, and who has been staggered by Pascal in each of their two bouts. As far as ways to seize a title goes, this is Chad Dawson’s best case scenario.
Dawson has already been stopped by Pascal. That isn’t something he’s going to have to worry about against Bernard Hopkins. The only thing that can stop Dawson now in his quest to be champion is if he lets off the gas and lets the old man hang around. But much like a football team in the playoffs celebrates when a lower seed pulls an upset and knocks off a dangerous potential conference final or Super Bowl opponent, so too will Chad Dawson be celebrating the chance to fight Bernard Hopkins instead of Jean Pascal.

Fox Doucette covers Friday Night Fights for The Boxing Tribune. He will gladly take on all comers. Find him on Facebook at facebook.com/MysteryShipRadio.