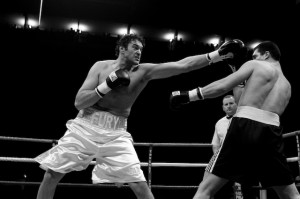 The pride of boxing has long been the heavyweight division.  Even the most casual observer in years past has been able to name the current heavyweight champion of the world.  Fighters like Jack Dempsey, Joe Louis, Muhammad Ali, Evander Holyfield, Mike Tyson – the lists goes on and on – transcended the sport to become household names.

There must be something in the water over in the U.K., because the land that brought the division the menacing giant Lennox Lewis has sprouted up even taller heavyweight contenders in Tyson Fury (14-0) and David Price (10-0).

Fury stands 6’9” tall, has maybe the coolest name in boxing history and already has a robust legion of fans.   Coming from a family long steeped in the Irish tradition of bare knuckle boxing, Fury works patiently behind a long lead jab and has shown decent leverage on his punches thus far.  He’s also deceptively quick.  Fury faces his biggest challenge this July against unbeaten British heavyweight champion Dereck Chisora.

Price is a bit shorter than his British counterpart at 6’8”, but boasts the better amateur career, which culminated with a bronze medal in the 2008 Olympic Games.  Price has a great jab but tends to flick it at times instead of putting real weight behind it.  He’ll get his first real test against British gatekeeper John McDermott this June.

Mike “The Rebel” Perez (16-0) has the body of a cruiserweight, but the ferocity of a Mike Tyson or a Jack Dempsey.  Like those all-time greats, Perez will be undersized against typical heavyweights and will need to rely on powerful and precise combination punching to carry him to the top.

Perez, from Cuba, outclassed his overmatched opponents in the latest Prizefighter tournament, including perhaps his best win in the final, a first round KO of Tye Fields.  Perez will now need to use his good showing as a springboard to bigger, better things as he continues his path towards contention.

Despite his physical tools, American, Deontay Wilder was not picked to come anywhere close to medaling at the 2008 Olympics.  He did.  Wilder took home the bronze becoming Americas only boxing medalist in Beijing.

Fast forward to today and Wilder (16-0) is not picked to come anywhere close to winning a title belt.  He might.  The 6’7” Wilder is still very raw (he had virtually no amateur career to speak of) but his team is bringing him along slow enough to make up for it and he very well could end up being a real contender.

Perhaps the fighter closest to contending for a title sooner rather than later is Germany’s Robert Helenius.  Helenius, nicknamed “The Nordic Nightmare”, is a 6’6” boxer-puncher who fights tall and mean.  He already has wins over former titleholders Lamon Brewster and Samuel Peter.  He’s 15-0 and may very well be boxing’s next big thing.

That’s either a good or a bad thing (depending on your perspective).  Helenius has been compared by some ring observers to the spitting image of a Klitshcko brother.