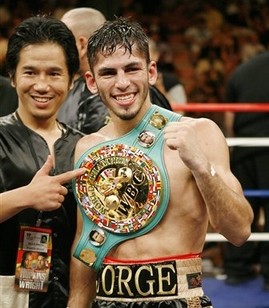 Despite a spirited early effort by the Mexican that produced a cut over Linare’s eye, the Venezuelan settled into his rhythm in the third round. Taking up the unfamiliar role of aggressor, Linares stalked his opponent, putting together sharp, well-timed combinations while smartly fending off Verdugo’s occasional and clumsy offensive surges.

By the seventh, it was clear that the game Los Mochis native had neither the skill nor the power to get back in the contest and, to prevent any unnecessary further punishment for the 23-year-old, the referee waved off the contest.

Trazancos, who has now been stopped in his last five contests, weighed-in at a career high 146.75 lbs. The veteran club fighter backed Chavez up against the ropes in the third round, but lacked the power to take advantage of Chavez’s retreat. The rest of the contest was all Chavez, who cruised through the vast majority of the four rounds doing as he pleased and never pushed beyond his comfort level.

The end came in the fourth round when Chavez landed a shot that caused Trazancos’ legs to buckle and had him reach out for the top rope to stabilize himself. The referee stoppage provoked a chorus of boos from the Mexicali crowd, a refrain that has become all-too-common in bouts featuring the Chavez bros. in supposedly friendly territory.