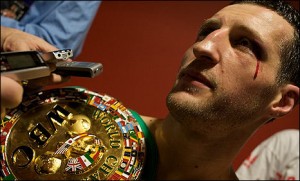 Respect hasn’t come easily to Nottingham native, Carl “The Cobra” Froch. After cutting his teeth on the British club circuit for the overwhelming majority of his career, Froch was slapped with the label of “limited Euro brawler”. Despite winning his first world title with a 2008 unanimous decision victory over future light heavyweight champion Jean Pascal, Carl Froch was unable to shake the label. Not even a dramatic twelfth round come from behind TKO victory over Jermain Taylor in 2009 would put him in conversations of the best in the super middleweight division.

When Showtime’s Super Six World Boxing Classic began, Froch was one of the long shots to win it all. As he heads into Saturday’s semifinal showdown with late entrant Glen “Road Warrior” Johnson (51-14-2, 35 KO), Carl Froch (27-1, 20 KO) has finally been given the respect he has rightfully earned.

A sloppy, foul-filled points win over Andre Dirrell in the opening round, followed by a back-and-forth battle with Mikkel Kessler proved that Froch has a huge reserve tank, and he will dip into it to get to the finish line first. His shutout win over Arthur Abraham in the third Group Stage of the Tournament opened the eyes of the boxing world to a side of Carl Froch that many didn’t know existed.

Carl Froch is known for his ability to take a punch, his respectable punching power, and his tendency to carry his hands low and attempt to slip punches. Against the straight forward Arthur Abraham, Froch boxed beautifully. He kept a stiff jab in the face of Abraham all night. His lateral movement kept Abraham from setting up and letting his hands go. Time and time again, Froch caught Abraham moving in and pounded him with power shots that got through and around Abraham’s vaunted guard. A more skillful and complete Carl Froch was introduced to the hardcore boxing fan, who finally accepted Carl Froch as one of the best 168-pounders in the world.

“I’m WBC champ and everybody talks about my one loss, against Mikkel Kessler, and 80 percent of the people don’t acknowledge it was a loss. The fight could have gone either way,” Froch stated at a recent press conference.

Whether or not Froch is using a perceived sleight to keep a chip on his shoulder is irrelevant. Froch went on to speak about his redemption in the tournament and his desire to fight the best so that the world can see he is truly the best of the division. Froch remains confident in what he has done in his career and in the outcome on Saturday night.

“Glen Johnson’s trainer is delusional. He’s not only not going to win the fight; he’s not going to win a round. I’m too young and fresh. From round 1 to 12, I will dominate,” Froch told reporters in response to Orlando Cuellar’s statement that Saturday would be the end of Carl Froch’s run in the tournament.

Carl Froch has done what he’s always done in the ring; win fights by any means necessary. His wins have been ugly, dramatic, or a class performance, but he’s only gotten so far with limited exposure in his home nation.

Under former promoter, Hennessey Sports, Froch was not showcased on SKY Sports, the leading sports outlet in the UK After recently signing with Matchroom Promotions, SKY Sports, in addition to Showtime Championship Boxing, will air this Saturday’s battle between Froch and Johnson. The bout will be held at the Adrian Phillips Ballroom at Boardwalk Hall in Atlantic City, New Jersey, marking Froch’s 2nd appearance in an American venue.

The time for Froch to shine is now. Fighting in front of an American crowd, and on the leading boxing outlet in the UK make this an opportunity that could propel Froch to bigger and better opportunities in his career.

Saturday night’s winner will move on to the finals to face Andre Ward, likely in a Las Vegas venue. The man who hoists the Tournament Championship Cup will have IBF super middleweight champion Lucian Bute waiting in the wings, and super stardom waiting with him.