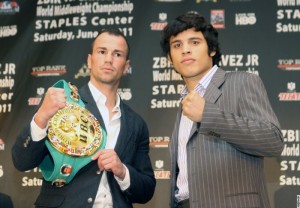 Man, I wish I spoke German. It’d make figuring out Sebastian Zbik so much easier. The guy’s the WBC middleweight champion (of a sort, since “WBC Champion Emeritus” Sergio Martinez is the real top dog). He’s ranked #5 by ESPN, #6 by Ring Magazine, and #9 by The Boxing Tribune. By all accounts he’s solid, unspectacular (10 knockouts in 30 fights), and gets the job done against the Euro guys who have been put in front of him.

Across the ring, you’ve got Julio Cesar Chavez Jr., whose greatest asset in the ring is his name. Unranked by every major publication except the Tribune (which has him just behind Zbik at #10), he has beaten Mexican club fighters, sub-journeymen, and John Duddy. That last, granted, was an impressive win, but it is the only significant step up in class Chavez has taken in his career. Content more to use his father’s name to get paydays that are not commensurate with his level of accomplishment, slapped with the “lazy” label, and giving little but a good word that he will be different this time, it is hard to endorse the belief that he’s got a shot to get anything but a home-cooking decision in front of a partisan Hispanic crowd in Los Angeles Saturday night.

It is not, however, so easy to say that Zbik has fought better competition. Granted, he has fought a pretty decent who’s who of European middleweights, and to his credit he did a professional’s job in defending his WBC interim belt three times before his belt was upgraded from coach to business class by Jose Sulaiman. By all reasonable accounts, it wasn’t that Zbik took soft opponents; it was that he fought the guys in front of him and dispatched them on points, as efficient as a Volkswagen.

Which brings us to Saturday night’s fight. The matchup is delicious, a flamboyant inheritor of the Mexican boxing tradition, who has said in press conferences that his opponent has never seen the style before (and Chavez is right), against a plodding, efficient, technically sound fighter who has far greater dedication to his craft than does the hometown favorite. Styles make fights, indeed.

Speaking as a guy who has watched a lot of those same types of European fighters over the years, I’m going to predict Zbik by controversial split decision. Chavez will get one of the judges bamboozled, but the German will, if he gets past the first three rounds, settle in to confounding Chavez, keeping him off balance and at the end of his jab, fighting like a Klitschko in miniature minus the knockout power, counter-punching effectively, and frustrating Chavez, whose heart is in serious question as he has never been significantly tested by a high level opponent. This has all the makings of a 97-93 or 96-94 type of scorecard in favor of Zbik, although it is a near certainty that one judge will score it similarly but in the opposite direction.

Which in turn begs another question—what does all of this matter, besides not at all, to the future of the middleweight division? Saturday’s winner will probably take a fight against Marco Antonio Rubio, who earned mandatory-challenger status with his demolition of David Lemieux two months ago. Both guys should beat Rubio, since Zbik already has that kind of experience and Chavez will, if he wins, be considered by association to have it.

Nobody seriously believes that Sergio Martinez’s status as “Champion Emeritus” was anything other than a pay-per-view money power grab by the WBC to extract a bigger sanctioning fee from the Bob Arum hype machine—like they say in politics, “follow the money”. The whole idea was to get a belt around the waist of Chavez so that when he challenges Martinez for the real title it will look more plausibly like a championship fight. I just don’t think Chavez has the chops to pull it off and I think he’ll get exposed in there against a skilled, technically sound fighter.

Which means…what, exactly? Simple. I think Zbik will win this fight, and I think it will be good for boxing if he does. The slap in the face Bob Arum will take, the giant plate full of crow the hype machine will have to eat, and the sparing of the boxing public from the indignity of watching an overhyped pretty boy get his brains bashed in by Sergio Martinez are all desirable outcomes for the sport. At least if the German exposes Chavez it won’t be fierce enough to do any real permanent damage to Julio’s gray matter. That sounds to me like a win-win.

Fox Doucette covers Friday Night Fights for The Boxing Tribune. He is efficient…but never plodding. Find him on Facebook at facebook.com/MysteryShipRadio.