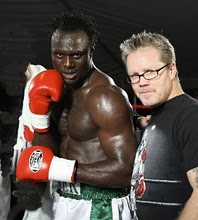 Kayode, 28, under the guidance of trainer Freddie Roach, has looked impressive in beating the likes of Alfredo Escalera Jr and Epifanio Mendoza, but struggled in his last contest against Nicholas Iannuzzi. The LA-based Nigerian is regarded as one of the cruiserweight division’s rising stars and is ranked #14 by The Boxing Tribune.

Godfrey, in his last bout, was blown away in five rounds by defending WBO cruiserweight champ, Marco Huck. The 30-year-old Providence, Rhode Island native has held numerous regional titles over the course of his 7-year career, but has yet to establish himself beyond the 2nd-tier level. Godfrey is currently ranked #19 in the division by The Boxing Tribune.

Kayode-Godfrey will take place at the Chumash Casino in Santa Ynez, California. The undercard will feature a battle of bantamweight prospects as Lancaster, California’s Chris Avalos (18-1, 15 KOs) takes on Russian Khabir Suleymanov (11-0, 5 KOs). Lightweight Archie Ray Marquez (12-0, 8 KOs) and welterweight Rashad Holloway (11-2-2, 5 KOs) will also be on the card.