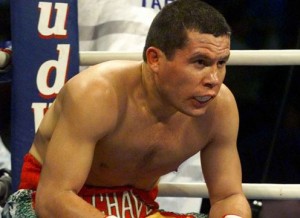 “El Gran Campeon Mexicano,” also known as “The Lion of Culiacan” is a six-time world champ in three weight classes and regarded by many as the greatest Mexican fighter of all time. He will be inducted this weekend into the International Boxing Hall of Fame.

One of ten brothers and sisters raised in a railroad car in Ciudad Obregon, Sonora, Mexico, Chavez made his debut at 17 years of age and battled his way through the hardcore Mexican club scene. He eventually landed a title shot, winning the vacant WBC super featherweight title against Mario Martinez in 1984.

His attempt to win welterweight gold resulted in a controversial draw with Pernell Whitaker that most analysts felt he lost.

After the Whitaker draw, Chavez returned to jr. welterweight, where he made one more defense before dropping the title to Frankie Randall in 1994. Chavez would take the title back in an immediate rematch and go on to make three successful defenses before losing the title to Oscar De la Hoya via TKO 4 in 1996.

Chavez would make an attempt to win the vacant WBC jr. welterweight title, scoring a draw against fellow Mexican, Miguel Angel Gonzalez and then drop a rematch at welterweight against Oscar De la Hoya. His last title shot resulted in a TKO 6 loss to Kostya Tszyu in 2000.