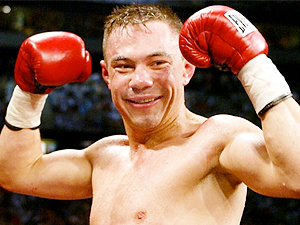 Former undisputed junior welterweight champion Kostya “Thunder From Down Under” Tszyu (31-2, 25 KO) was one of the five living inductees selected to be elected into the International Boxing Hall of Fame in Canastota, New York. Hall of Fame weekend activities begin on Thursday, June 9, and continue through the induction ceremony on Sunday, June 12. Induction ceremonies begin at 2:30 pm EST.

Fighting primarily out of his adopted home nation of Australia, Tszyu progressed quickly on his way to his first world title, beating future WBO jr. welterweight champion, Sammy Fuentes in his 6th professional bout. Tszyu moved on to take a unanimous decision victory over former lightweight titlist Livingstone Bramble in his 10th professional bout. He won the IBF jr. welterweight title in only his 14th bout, scoring a TKO victory over Jake Rodriguez in the 6th round of their January 1995 bout. Tszyu would successfully defend his title 4 times before losing in the 10th round of his 1997 bout with Vince Phillips.

Tszyu went on to capture the WBC and WBA jr. welterweight titles. He recaptured the IBF title with a one-punch TKO victory over Zab Judah in 2001, becoming the undisputed jr. welterweight champion. After knocking out Jesse James Leija in January of 2003, injuries would keep Tszyu out of action until November of 2004, when he returned to knock Sharmba Mitchell out in a rematch of their controversial first meeting 4 years earlier.

His career came to an end against Manchester’s Ricky Hatton in 2005. Tszyu put his IBF title on the line at the M.E.N. arena, in front of a raucous pro-Hatton Crowd. After 11 rounds which saw Tszyu behind on the scorecards, a shoulder injury kept Tszyu from coming out for the 12th round, and Hatton was declared the winner via TKO.

Tszyu has flirted with the idea of a comeback on several occasions, but has opted to channel his efforts to training. Last month Tszyu worked the corner of cruiserweight contender Denis Lebedev, when he scored a knockout victory over Roy Jones Jr. in the 12th round of their bout in Moscow. Tszyu has left the door open to a possible comeback, but a potential comeback won’t come before he enters the International Boxing Hall of Fame.