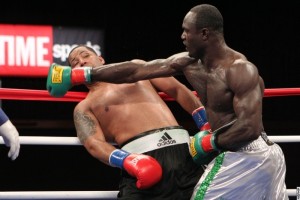 From the very beginning, it was obvious that the Los Angeles-based Nigerian was too strong, too sharp, and too athletic for Providence, Rhode Island’s Godfrey. In full control for all but a brief moment in the middle rounds where he was slightly buzzed by a Godfrey counter, Kayode cruised through a threat-free contest. Along the way, Godfrey would hit the canvas three times– in the first, fifth, and ninth rounds.

On the undercard, Chris Avalos (19-1, 15 KOs) took a ten round unanimous decision victory over awkward Khabir Suleymanov (11-1, 5 KOs) in a bout that, at times, threatened to get out of control. Avalos dropped Suleymanov in the first and the third rounds, but had a point deducted form him in the third when he refused to stop battling despite referee Lou Moret’s attempts to break up the action following that round’s knockdown.

Also, California-based Armenian, Art Hovhannesyan (14-0-1, 8 KOs) scored a surprising sixth round TKO over prospect Archie Ray Marquez (12-1, 8 KOs), dropping the Albuquerque, New Mexico native in the first, second and fifth rounds before putting him away in the sixth with one last, hard knockdown.