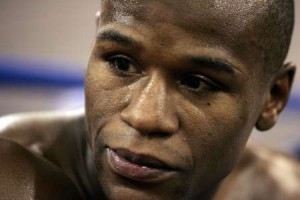 Hernandez, who made a total of eleven successful defenses over the course of his two title reigns, passed away earlier in the week after a long bout with cancer. With medical bills having decimated the former champ’s finances, the generous offer to cover funeral costs will help the grieving family greatly.

A 21-year-old Mayweather stopped Hernandez in eight rounds back in 1998 to capture his first world title.

* The WBA has stripped featherweight, Yuriorkis Gamboa of his belt and his status as “Unified” world champion for not complying with regulations in his last defense against Jorge Solis. For the record, Chris John is the WBA’s “Super” world champ and is regarded by The Boxing Tribune as the organization’s true titlist.

* The July 23rd clash of British heavyweights, Tyson Fury and Dereck Chisora, will be broadcast in the US via pay per view by Integrated Sports for a price of $24.95. The show will air live at 3pm Eastern Time.

* The IBF has arranged for a four fighter mini-tournament at middleweight to determine the next challenger for Daniel Geale’s newly-won title. Former champ, Sebastian Sylvester will face Sam Soliman and Roman Karmazin will be taking on Osumanu Adama in the first round.