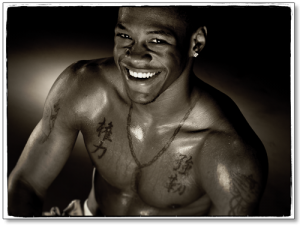 In 2008, an unheralded 22-year-old heavyweight from Tuscaloosa, Alabama headed to the Olympic Games in Beijing, inexperienced but hopeful.  The 6’7”, 200lb fighter with a lean, muscular frame headed East as one of the least likely candidates to medal from an outstanding U.S. boxing team that featured two reigning amateur world champions in welterweight Demetrius Andrade and flyweight Rau’Shee Warren, among a myriad of other talented favorites.

Yet , despite the U.S. team’s ballyhooed arrival in China, only one fighter would return home with a medal, and by most accounts it was not who anyone expected.

Deontay Wilder, the lanky, unassuming heavyweight from Alabama, used his long reach and fast hands to return from the Olympics as America’s sole medalist in 2008.

Not bad for a guy who just had started boxing less than three years earlier.

Making his triumphant return, Wilder appeared on ESPN’s Friday Night Fights where he laid out the strategy for his upcoming professional career.

And take it slow he has.

Its 2011, and most boxing fans still know Wilder only from his 2008 Olympic success.  Sure, he’s been staying active in the ring, but he’s still mostly working the local show circuit.  In an age of instant gratification where promoters move fighters up as fast as possible for big money paydays, Wilder stands out like a 6’7” lanky kid from Alabama would just about anywhere.

But there is method to the madness.

Deontay Wilder is slowly building up his resume, adding needed weight to his long-limbed frame (he’s added almost 20lbs of muscle since the Olympics) and making up for lost time in the ring –all at once.

At age 25, where most fighters at the same stage would have already logged countless rounds of amateur experience, Wilder is still the relative novice –albeit an undefeated, professional novice with 16 straight knock-out victories.

“Deontay is moving along at a good pace,” remarks his coach and manager Jay Deas.  “He’s only had about 30 amateur bouts, and his amateur and professional actual ring time total is about four hours.”

So astutely, Deas and co-manager Shelly Finkel are doing everything they can to get Wilder as much work as possible.  Wilder recently sparred with WBA heavyweight champion David Haye to help get Haye ready for his upcoming unification bout against Wladimir Klitisckho.  Haye praised Wilder as “athletic, busy and fast”.

“Sparring went great with Haye,” says Deas. “It was a fantastic experience and let Deontay know where he stands in the heavyweight division.”

And though where Wilder stands currently is as a fighter with only about four hours of actual ring time, Deas expects Wilder to continue to measure himself against the best competition available – no matter how far they have to travel to find it.

“We travel 6-8 hours driving one way for sparring…and go across the pond to work with David Haye,” Deas says.  “We hope to go to camp soon with Tomas Adamek.”

Adamek, of course, is scheduled for a heavyweight title shot against Vitali Klitsckho this September.  Working with world champions, contenders and journeyman alike, the game plan remains the same as it has always been: Wilder and company travel any and everywhere they can to help get Deontay the one thing Deas (or anyone else) simply cannot teach him: experience.

Wilder’s next bout fits the bill.  Scheduled for Saturday, June 18 in Tuscaloosa, Wilder will take on cagey veteran journeyman Damon Reed (46-15) who went the distance in his last fight –a decision loss to James Toney.  Reed will provide yet another small but important step in Wilder’s carefully planned career.

“Deontay continues to work very hard to reach his goal of becoming heavyweight champion of the world,” asserts Deas.  And when asked how Wilder deals with the added pressure of being one of America’s few young heavyweight hopefuls in an otherwise bleak divisional landscape, Deas responds with nary a hesitation.

“Deontay enjoys pressure,” he says confidently.  “It fuels him to perform.”