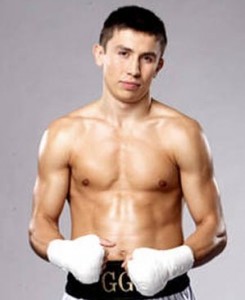 WBA middleweight belt holder, Gennady Golovkin (20-0, 17 KOs) will be defending against his most accomplished opponent in Uganda’s Kassim Ouma (27-7-1, 17 KOs) this Friday on the Anselmo Moreno-Lorenzo Parra undercard in Panama.

Kazakhstan’s Olympic silver medalist, Golovkin was last in action in December, successfully defending his belt via KO 3 against Nilson Tapia. Prior to that, Golovkin’s most impressive win was a first round KO against Milton Nuñez in September of 2010.

This will only be Ouma’s third fight at middleweight, with the other two being a unanimous decision loss to Jermain Taylor in 2006 and a TKO 6 victory over Joey Gilbert in September of last year. He has previously competed at jr. middleweight, beating Verno Phillips (UD 10, UD 12), Marco Antonio Rubio (UD 12), Sechew Powell (UD 10), and JC Candelo (TKO 10). Most recently, though, Ouma has lost five of his last seven, losing competitive bouts against Vanes Martirosyan, Gabriel Rosado, Cornelius Bundrage, Saul Roman, and Taylor.