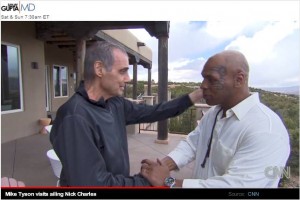 Former CNN sports anchor Nick Charles says he was the happiest he’s ever been, building a new life, with his wife and a new daughter, when he learned he had advanced bladder cancer.  Doctors tell him he’s on borrowed time, but Nick is determined to live fully in every remaining moment.  With wisdom and grace, Charles talks to CNN chief medical correspondent Dr. Sanjay Gupta about making peace with old regrets, saying goodbye to friends and preparing his family – most of all his young daughter, Giovanna – for life without him in a special edition of SANJAY GUPTA MD that will air over Fathers’ Day Weekend (June 18 and 19).  In this moving and revealing excerpt, Charles meets with old friend and boxing legend Mike Tyson to talk about some of the lessons he’s still learning about living during this fight.

Watch more of this story on SANJAY GUPTA MD Saturday June 18 and Sunday June 19 at 7:30AM ET only on CNN. Nick Charles and Mike Tyson Video Clip: http://on.cnn.com/imqdfD